It’s wild, it’s wackier than ever, and it’s back for another year. Of course we’re talking about OC Fair food for the 2022 season. 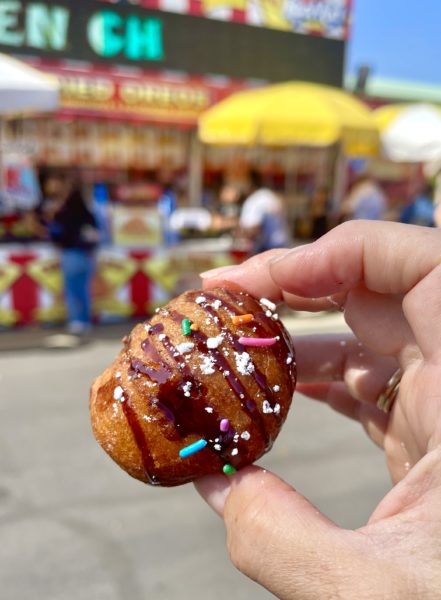 A classic deep fried Oreo at the OC Fair

This year at the fair, you’ll find some of the old (crazy) standards. (Think fried Oreos, bacon-wrapped fried pickles, and basically everything fried.) What’s new is a few even wackier things (Cap’n Crunch on … a chicken sandwich?!? Yes – Read on.) 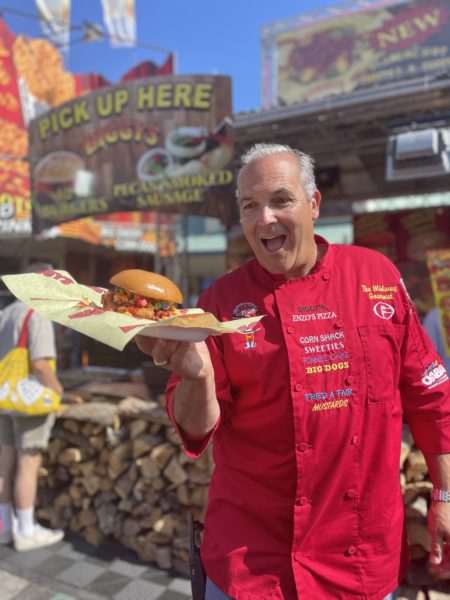 Dominic Palmieri of Biggy’s shows off a Cap’n Crunch chicken sandwich at the OC Fair.

The fair, which runs from now through August 14, like almost all county fairs, features outrageous foods. Each year the fair’s foodmasters try to outdo themselves with the next crazy concoction. And while we’re not advocating for any of these choices as health foods per se, we are going to call the whole OC Fair food experience fun. Which, by the way, is exactly what those chefs hope you get out of it. 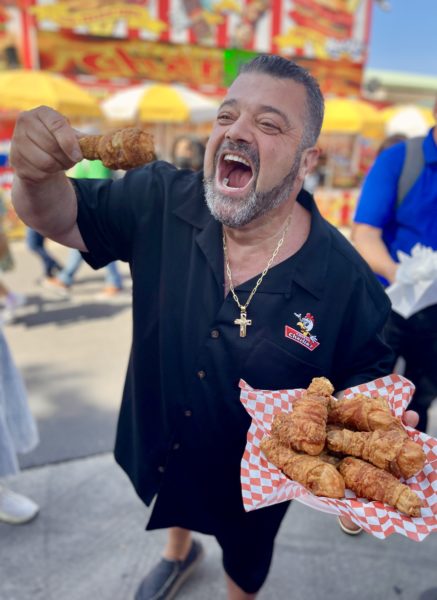 Chicken Charlie hams it up with his bacon-wrapped chicken legs at the OC Fair.

“That’s the best part of the fair for me – people walking up to the booth and seeing their reactions,” Chicken Charlie, one of the fair’s most visible food purveyors told us.

Thanks to Melissa’s Produce, as well as Chicken Charlie and the Midway Gourmet, two of the leading fair food sellers, we were able to check out some of the newest fair foods for 2022.

Chicken Charlie, a.k.a. Charles Boghosian, has been selling OC Fair food for the past 37 years. He has three eponymous booths at the fair, and one of his great claims to fame is that he’s credited with inventing the fried Oreo. 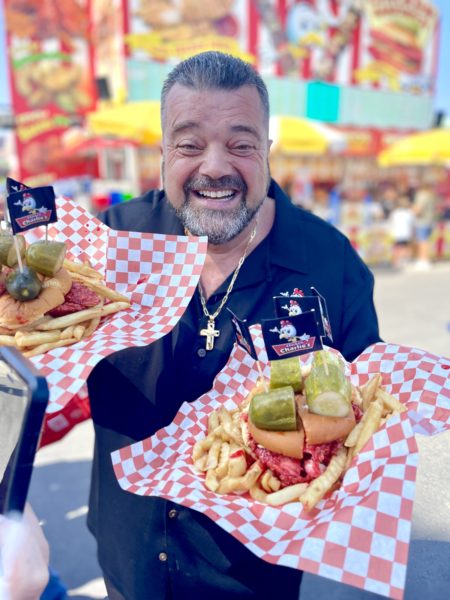 Chicken Charlie with his Kool-Aid Chicken Sandwiches at the OC Fair.

Of course you can find fried Oreos at his stands (and fried Twinkies, and fried cookie dough – all $9.95). But this year, you’ll also find …a Kool-Aid chicken sandwich ($17.95, served with pickles and fries). Yes, it’s crispy fried chicken, marinated in bright red Kool-Aid. (And it’s tasty – like sweet fried chicken.) 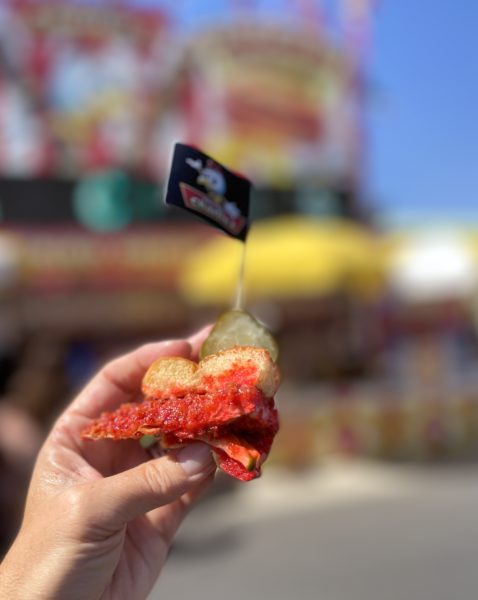 Get ready to take a bite of this Kool-Aid chicken sandwich.

Next, looking at side dishes, we want to call your attention to the fried bacon-wrapped pickles ($12.95) – juicy and salty. And for a surprisingly light and crispy meatless choice, we like the fried avocado spears ($12.95), served with a tasty ranch dressing dip. 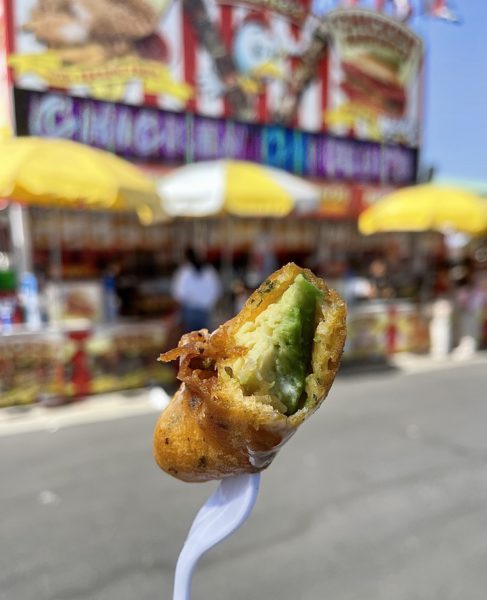 Have a bite of fried avocado at Chicken Charlie’s at the OC Fair.

Next we met The Midway Gourmet, a.k.a. Dominic Palmieri, who has been called “a certified evil genius.” (That’s how you know where this is headed.) The Midway Gourmet has more than a dozen OC Fair food stands, including Biggy’s, Enzo’s Pizza, Corn Shack, Sweeties, Big Dogs, Fried A Fair, and Mustards.

“The best part of the fair is that there’s something for everyone,” Palmieri told us. “We are always trying to make something impactful that will ‘wow’ your taste buds.” 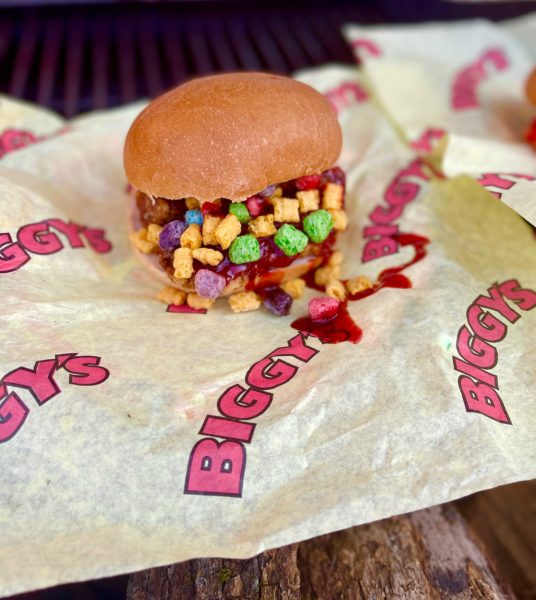 One of Palmieri’s most outlandish creations that’s new this year is the Cap’n Crunch chicken sandwich ($15.32). It’s fried chicken in an extra-thick and crispy batter, drizzled with raspberry-honey sauce, and garnished with Cap’n Crunch cereal. It’s perfect for sweet-salty lovers, with a strong emphasis on the “sweet.” (Don’t tell; we enjoyed the sandwich more without the cereal.) 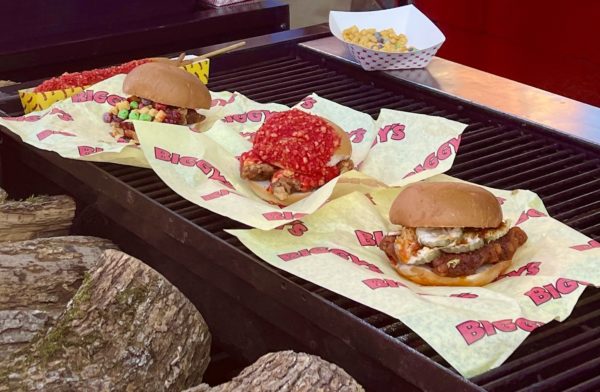 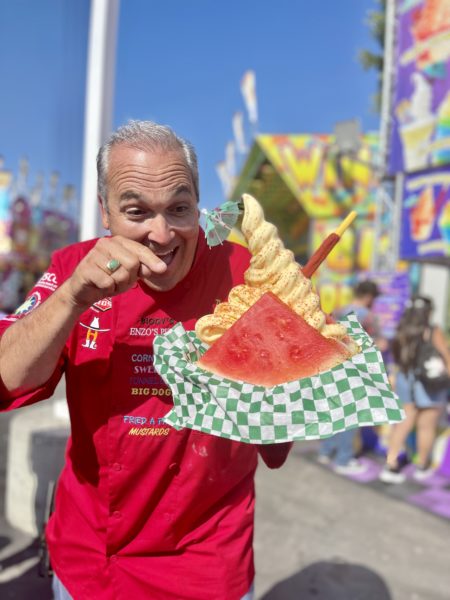 Palmieri shows off the Dole Whip Taco at the OC Fair.

On the sweeter side of OC Fair food, one of the items that seems to bring the most delight is the Watermelon Dole Whip Taco ($11.14) at the Dole Whip stand. It’s a carved out slice of watermelon, filled with pineapple Dole Whip (a frozen non-dairy dessert) and topped with tangy-spicy Tajin seasoning.

It’s similar to an item from last year, but they somehow found a way to make it bigger. (Palmieri had his staff make one so we could take photos, and then handed it to a family that happened to be passing by, to their surprise and delight.) 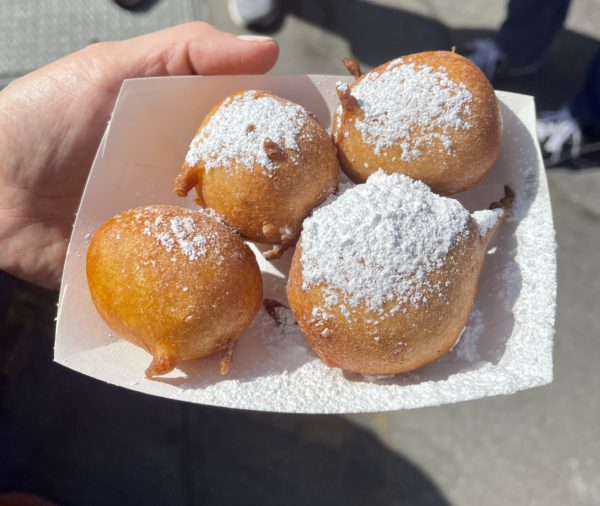 How do they deep fry butter? It’s actually somewhat ingenious. They start with a frozen pat of butter, then coat it in batter, and then deep fry it. The butter in the middle melts, but it stays within the giant puff of dough. That is, until you break it open. That’s when a cascade of melted butter comes oozing out. (Eat with caution.) 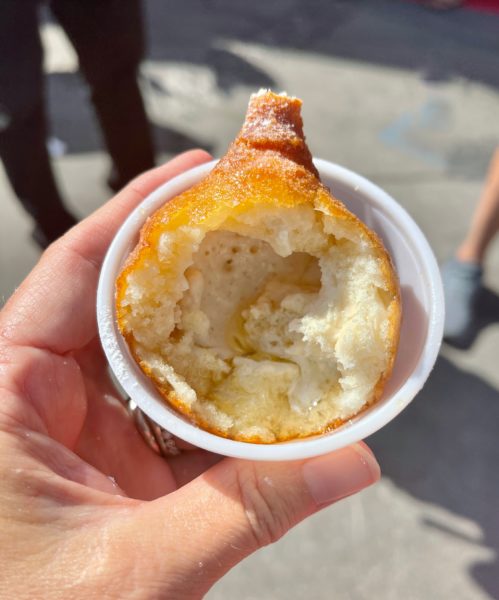 What does deep fried butter taste like? We think it tastes like a very buttery pancake (they serve it with maple syrup). There’s actually more dough than butter, which is probably a good thing. We would have been happy with it if if were just the puff with a glaze of butter, but hey, it’s the fair, right? 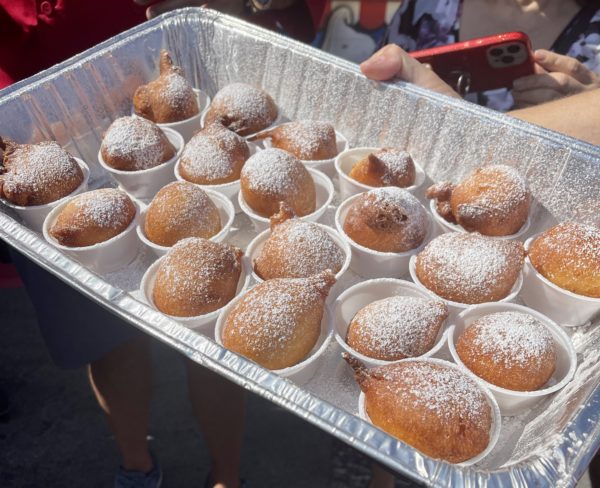 Palmieri told us that his favorite way to experience OC Fair food is to go from stand to stand. “But you probably have to come back five our six times to do that,” he acknowledged with a grin.
P.S. Want to take a look back at some classics? See last year’s story about the food at the OC Fair here.

Blogger disclosure: We attended the OC Fair through a media visit; we did not receive compensation for this post. All opinions expressed are our own.