The Most Fascinating Historic Hotel in Naples, Italy

If you plan to make a visit to Italy, we have the most fascinating and historic hotel in Naples to recommend. The Hotel San Francesco al Monte is a former monastery carved into the side of a mountain and filled with incredible artwork and relics. 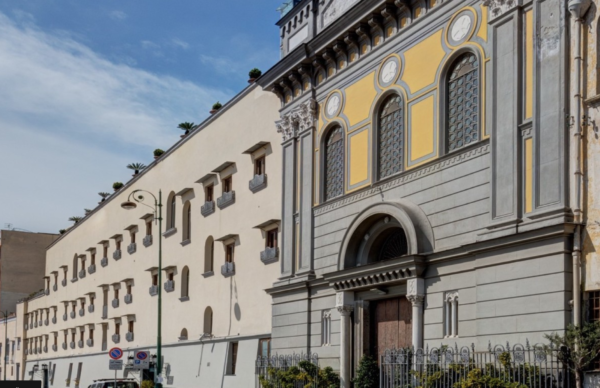 Through an extensive architectural renovation, it’s now a beautiful hotel – with surprises at just about every turn. You could say it’s part luxury hotel, part history lesson, and part art museum. 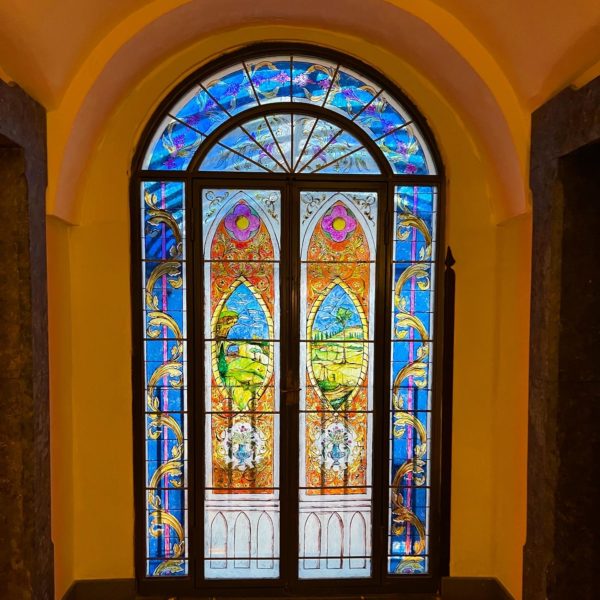 The Hotel San Francesco al Monte dates back to a 16th century monastery. According to hotel historians, Friar Augustine Miglionico carved the first cell into the side of the hill of San Martino. (He was part of the Order of Friars Minor Conventual, known as the “Barbanti” for their flowing beards.)

Over time, the dwelling became the Church of Saint Lucia Vergine e Martire. A more extensive and organized religious complex grew alongside it.

One of the most famous residents of the monastery was Giovan Giuseppe della Croce, who spent the last 12 years of his life there. “Saint John Joseph” is the patron saint of the nearby island Ischia. Among other things, he is famous for the miracle of the apricots that grew around him even during the winter. He was beatified in 1789, and according to the hotel, that same year, residents turned his cell into a votive chapel. 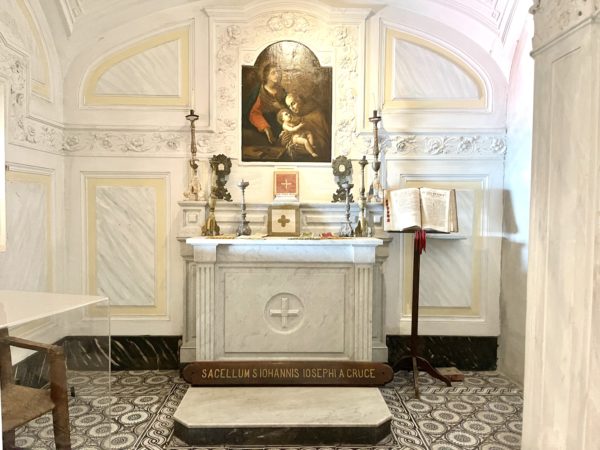 Today, you can see most parts of the votive chapel in a publicly accessible area on the third floor of the hotel. It’s one of the most fascinating and “I-can’t-believe-I’m-seeing-this” areas of the entire resort.

Moving forward to the present day, the hotel has all of the modern amenities you would expect.

First things first: There are 45 rooms in the hotel – all previous monks’ rooms. In some cases, hotel architects combined rooms to create “junior suites” with sitting rooms. 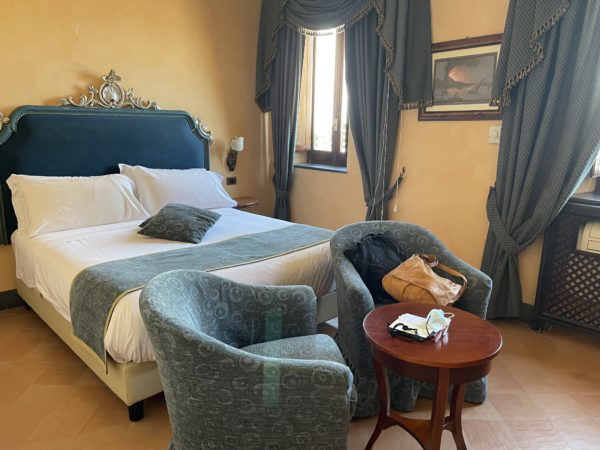 The interiors feel cozy and authentic, with pastel stucco, dark wood accents, and classic furnishings. Some of the rooms on the upper floors maintain the details of the 16th-century architecture. And even better, all of the rooms look out onto the Bay of Naples, where you can see from Mt. Vesuvius to Capri. (On the nights we visited, we could see little fireworks shows out the window every night. Why? Who knows? But we have no complaints.) 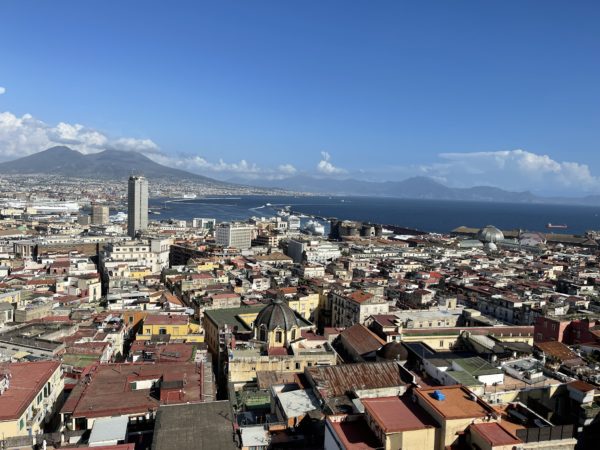 The hotel also features a terrace restaurant (La Terrazza dei Barbanti), which offers one of the most spectacular views in the city. Oh, and the food is delicious too… We enjoyed a multi-course breakfast/brunch every day on the terrace. It took everything we had to tear ourselves away from all of the delicious offerings and start the day. 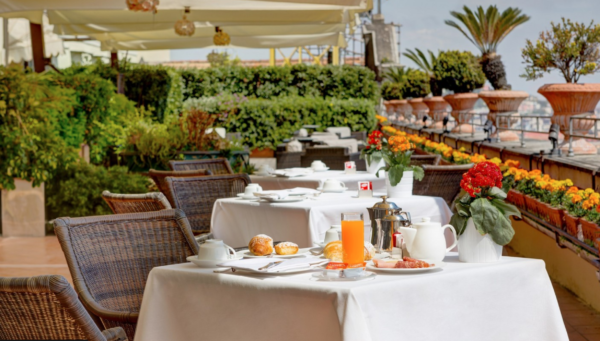 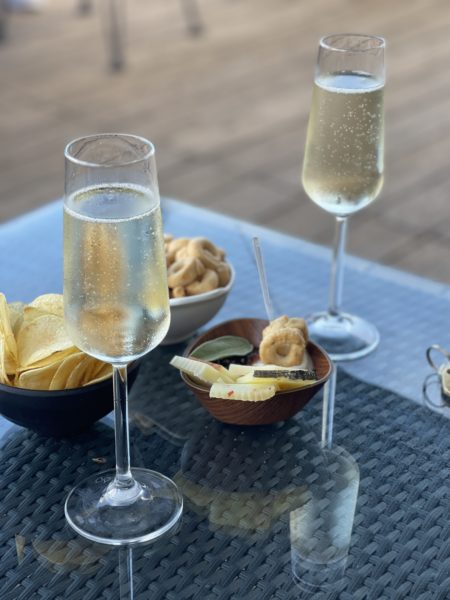 A snack on the terrace of Hotel San Francesco al Monte.

On the 7th-floor rooftop is the pool and restaurant Il Vigneto. This lush, fragrant retreat is also one of the few places in Naples, with a 360-degree view from sea to city. You can catch the gulf, Mt. Vesuvius and Capri, and the hill with the Vineyard of San Martino. Above it lies the Carthusian monastery of San Martino and the tufa Castle of Sant’Elmo. 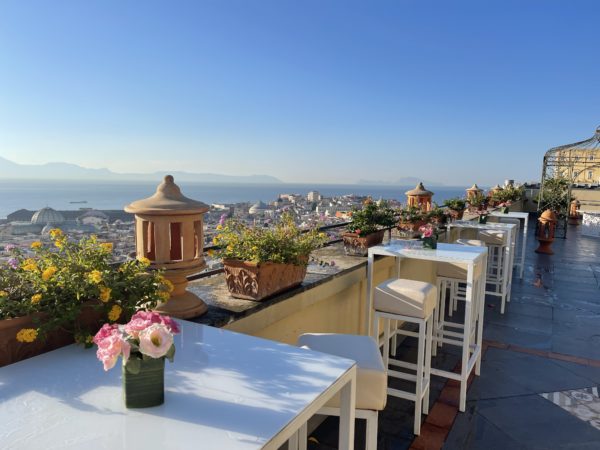 Add in Time for Relaxation

On the top floor, the hotel features a pool (open during the summer months) carved into the side of the mountain. 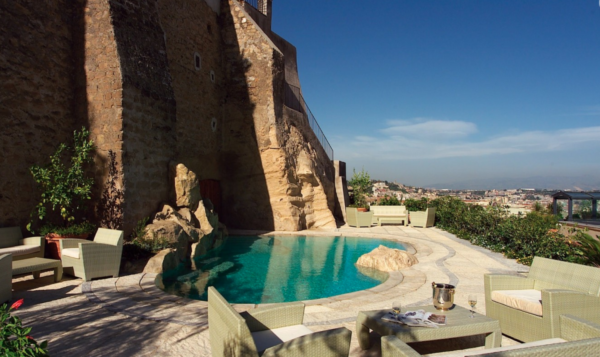 The pool carved into the side of the mountain – Photo via Hotel San Francesco al Monte.

The top-floor terrace also showcases ancient vegetable gardens that date back to the time of the monks. With all of this greenery, it is uniquely suited to hosting large events such as weddings. 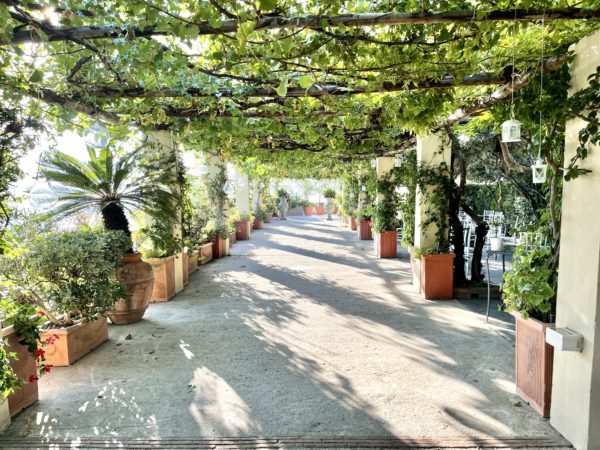 Furthermore, there’s also a wellness spa (Antica Essenza) with a variety of spa treatments. Within those thick stone walls, you will feel relaxed and protected.

Ancient and Modern Artwork to See

But above all, you can’t walk down the halls at Hotel San Francesco al Monte without seeing artwork. Throughout the hotel you will see fragments of frescoes, ancient majolica, and other paintings and decorations. 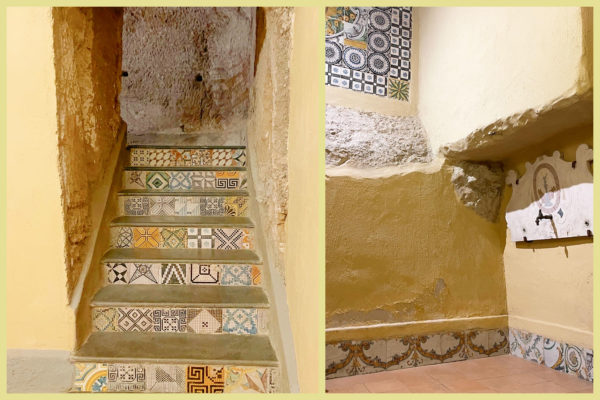 In many of the hallways, paintings of monks rest right above the doorway to each room. 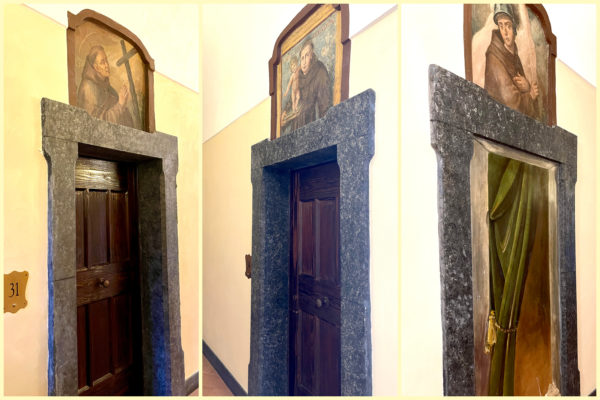 And in one alcove is a massive and intricate historical scene from Naples. 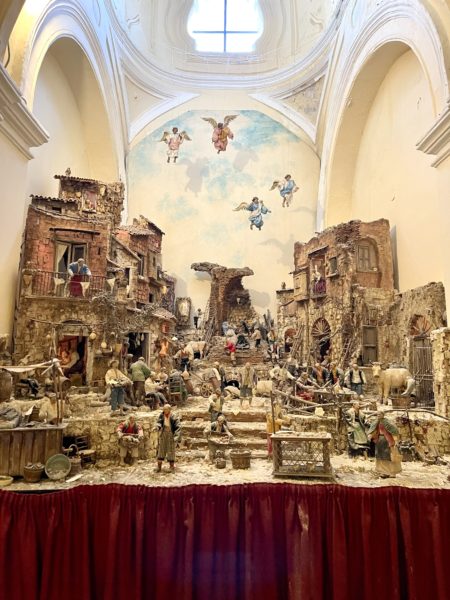 Other treats to find when winding through the hallways include sculptures and stunning stained glass – and even modern art. (The bull is a powerful symbol in Naples, where a bull’s horns signify strength and virility.) 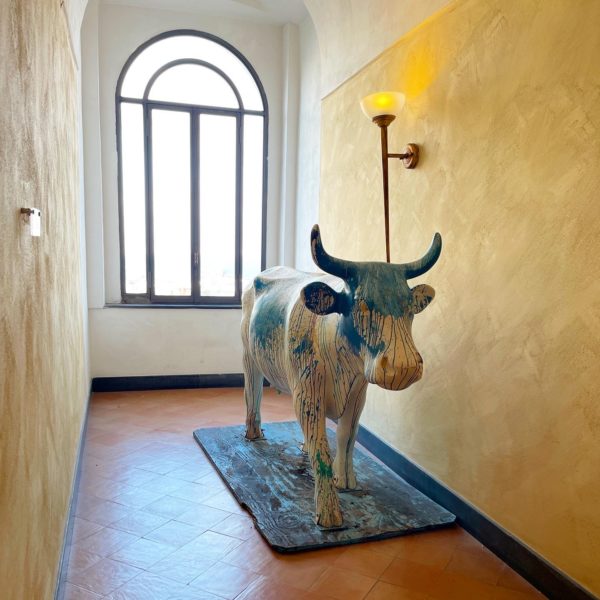 But perhaps the most fascinating part to see is the third floors with its historic living spaces. Open for public viewing is the Refectory (covered in frescos), the Hall of the Oven, and the Conventual Room. 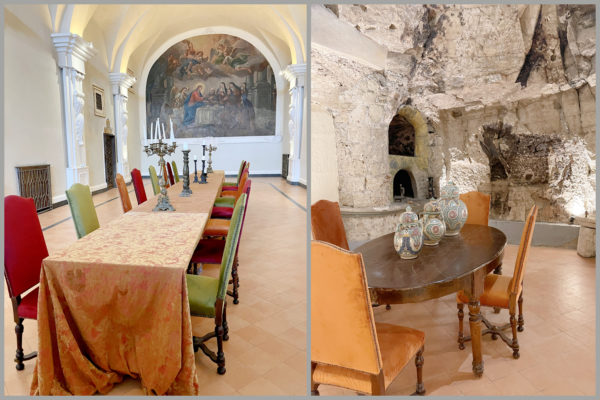 And if you explore those rooms, you’ll find more passageways and stairwells that lead to…well, you’ll have to keep exploring to find out. At some points you might find a stairway that’s so pretty, you get distracted about whether you’re going up or down. 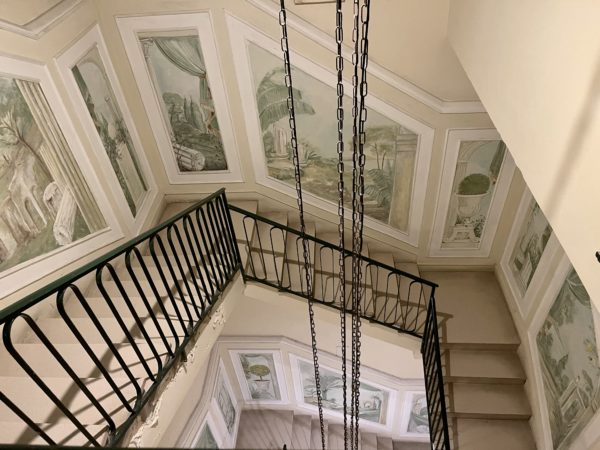 The hotel’s addres is Corso Vittorio Emanuele, 328, near the Quartieri Spagnoli area of Naples. It is very close to two funiculars (rail cars) to help you get up and down large hills.

The Montesanto Funicular is just 400 meters from the hotel, and departs every 15 minutes for trips to the downtown, the Archeological Museum, Certosa di San Martino, and Sant’Elmo’s castle.

Then the Central Funicular is 300 meters from the Hotel, and departs every 15 minutes for the Royal PalaceSan Carlo Theater, Via Toledo, the port, the seafront, and shopping areas.

It’s a great launching point for just about any Naples excursion. And at the end of the day, you can return to the hotel and bask in its wonders.

Blogger disclosure: We visited this hotel as guests of ANICAV and the Greatest Tomatoes from Europe campaign on our Italian tomato tour. We did not receive compensation for this post; we just were so fascinated by this hotel we needed to write about it.