Fair food is by definition outrageous, and this year’s OC Fair Food (at the Orange County Fair) is no exception. Huge portions, crazy food combinations, and deep-fried everything is the rule. 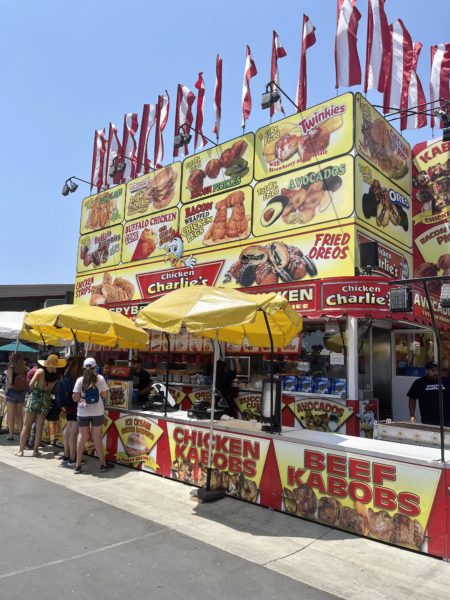 Of course we (and probably most people) wouldn’t eat like this every day. But we’re still fascinated by fair food. Each year some of the most outside-the-box-thinking chefs in the country come up with new and crazy food combinations. And people keep coming back for more. 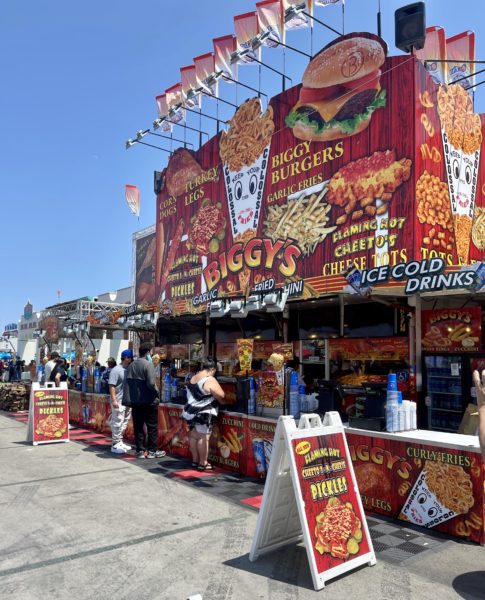 Biggy’s at the OC Fair

To learn more about this year’s OC Fair Food, we took a look behind the scenes on opening day with our friends at Melissa’s Produce and two of the OC Fair’s biggest food vendors: Chicken Charlie and The Midway Gourmet.

The vendor known as Chicken Charlie has been called “The Master of Fun Food” and “Southern California’s Deep-Fry King,” just to give you an idea of where we’re starting. 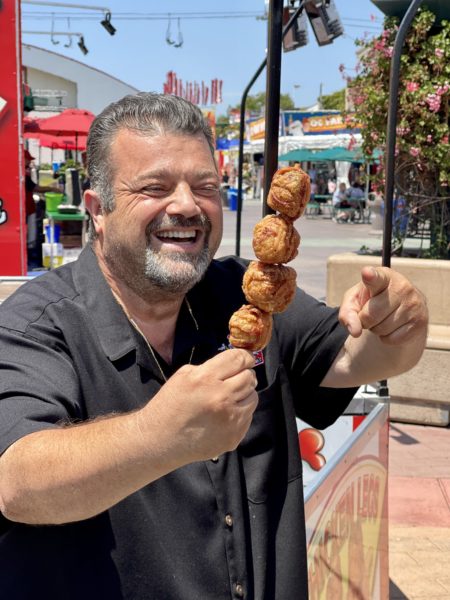 Chicken Charlie, a.k.a. Charles Boghosian, has been selling fair food since the early 1990s. He is credited with “inventing” the deep-fried Oreo.

This year, of course he’s back with the fried Oreo – but he had to keep pushing the envelope to find something new. “Everyone’s using buffalo sauce these days,” he told us. That led him to muse… What if you deep-fried a brownie and then topped it with buffalo sauce?

That experiment was tasty, but he decided he needed to mellow out the heat a little bit, so he added a scoop of ice cream. And voila! This year’s new food darling, the “Buffalo Brownies” were born. 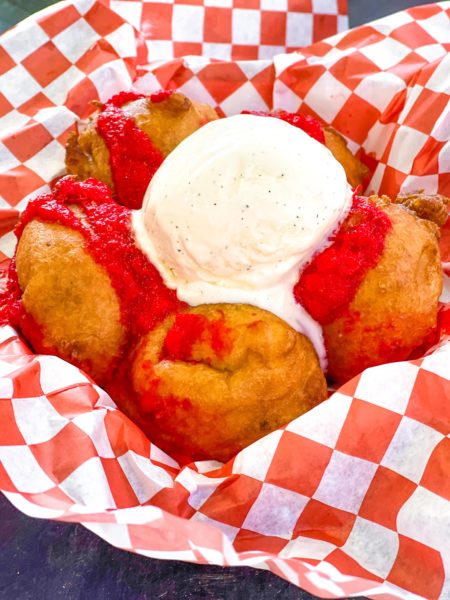 What do they taste like? As our friend Robert Schueller of Melissa’s Produce put it, “It’s like a brownie crashed into a donut…and then they hit an ice cream truck.” Honestly, that’s pretty close. Deep-frying the brownie creates a little bit of a chocolate-filled donut feeling.  Plus, you barely taste the heat of the buffalo sauce, so it all kind of melts into a ball of deliciousness. Here’s a peek at the inside: 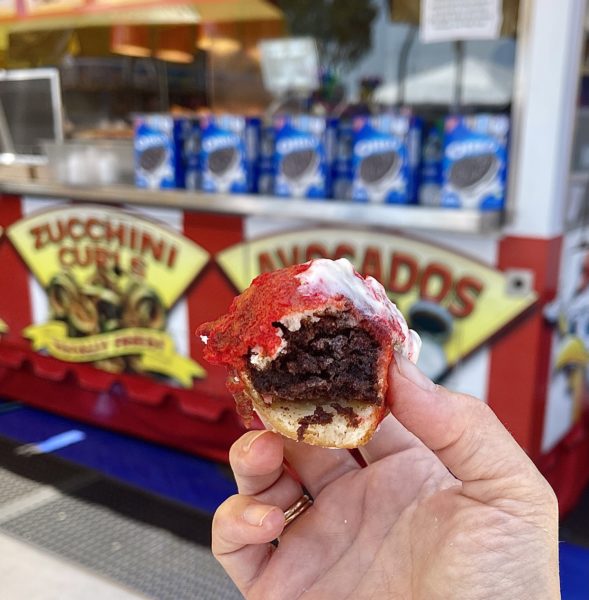 The inside of a “Buffalo Brownie” at Chicken Charlie’s

What else does Chicken Charlie’s have to offer? Well, the fried bacon pickles are a classic you cannot miss. Plus there’s fried avocados, bacon-wrapped chicken legs, frog legs, an ice cream chicken sandwich between two Krispy Kreme donuts, and a buffalo chicken “cone” with mac and cheese. Oh, and don’t forget the fried Oreos (as if you could).

Next we met The Midway Gourmet, a.k.a. Dominic Palmieri, who has been called “a certified evil genius.” (So that’s how you know where this is headed.) The Midway Gourmet has more than a dozen carnival food stands, including Biggy’s, Enzo’s Pizza, Corn Shack, Sweeties, Big Dogs, Fried A Fair, and Mustards. 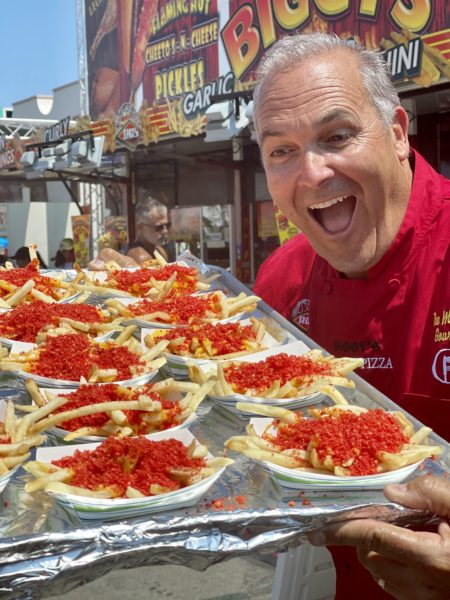 Palmieri told us that he’s always seeking that perfect combination of “salt, acid, and heat” – plus some crunch for texture. For some reason Flamin’ Hot Cheetos are super-popular right now on the fair circuit, so his group is getting a lot of mileage out of crushed and whole Cheetos. 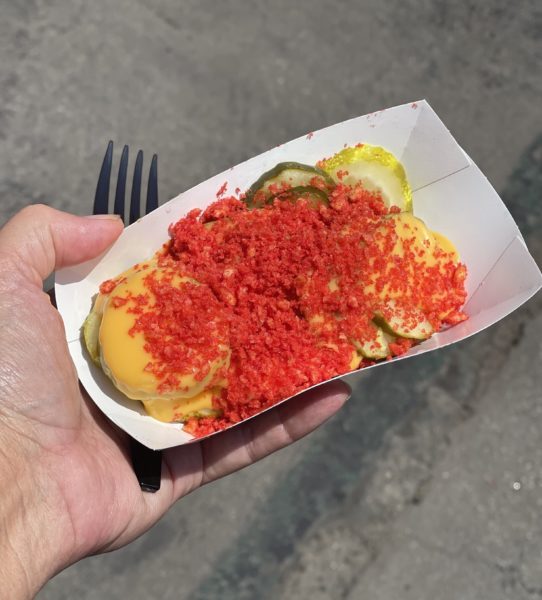 The pickles – sliced dill pickles topped with cheese sauce and a layer of crushed Flamin’ Hot Cheetos – have an interesting back story. Palmieri said that the company used to make them out of one large pickle. The process was labor intensive because they would hollow out the pickle and fill it. Then one day an employee walked into the back office carrying a container of sliced pickles with a familiar topping. “What’s that?” he asked her. She replied, “Well, the guys told me we were running low on pickles so I just made my own Flamin’ Hot Pickle using pickle slices from the hamburger bar.”

It was the perfect solution, he said. Following that, the company searched high and low to source the perfect crunchy pickle slices, and the rest is history. It’s now an easy-to-eat, easy-to-share dish that everyone can enjoy with less mess.

Even Fruits Get the Crazy Treatment 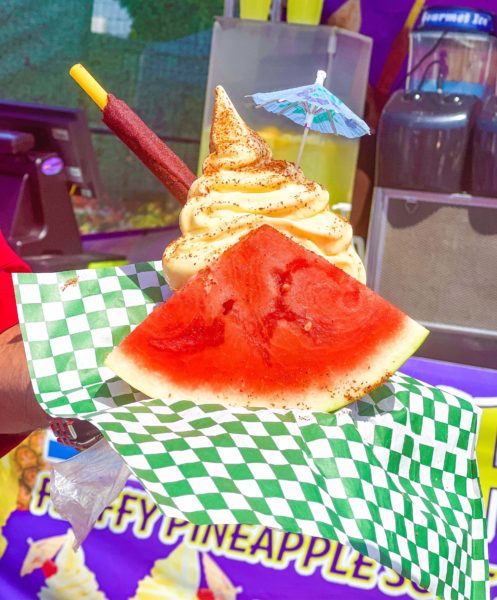 Last but not least, at the OC Fair, even fresh fruit gets a little crazy. At the Dole Whip stand, we tried a Watermelon “Taco” with Dole Whip and Tajin. The vendors carve out a slice of watermelon with a slot in the middle, into which the server pipes some Dole Whip (non-dairy frozen pineapple soft serve). Next they sprinkle it with Tajin seasoning and top it off with a little paper umbrella. It’s spicy-sweet, and incredibly refreshing.

Are you hungry yet?!?! Because if you try the OC Fair food, like we did, you won’t be anymore! Also, if and when you go, make sure you stop by the Culinary Arts building. The displays are chock-full of amazing local creations, plus information on all foods grown in California.

The OC Fair is open Wednesdays through Sundays through August 15. Advance purchase tickets are required at www.ocfair.com.

Blogger disclosure: These observations and photos are from a behind-the-scenes media tour of the OC Fair food stands with Melissa’s Produce. We did not receive compensation for this post. All opinions are our own.