Tillamook Cheese and the Oregon Coast

Visit Tillamook County along the Oregon coastline, and you’ll see why people call it the land of “Cheese, Trees, and Ocean Breeze.” The scenery is stunning, and the cheese is world-class. 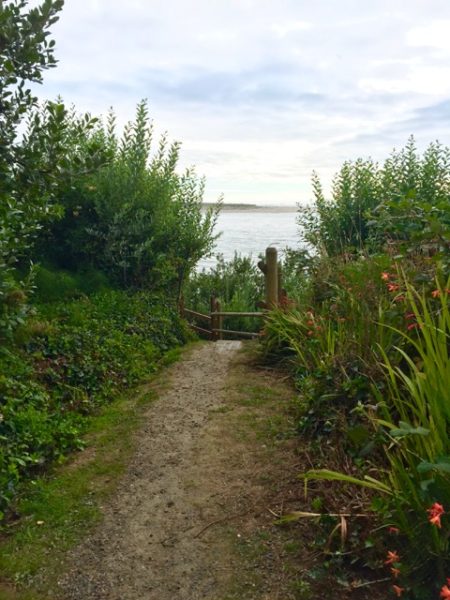 Thanks to Tillamook County’s mild and wet climate, the moist grassland is the perfect spot for dairy cows. In fact, wherever you see an open expanse of grass, chances are you’ll also see cows roaming and munching. (There are actually more cows in Tillamook County than people!). These well-nourished cows yield rich and pure milk that happens to be perfect for butter, ice cream, and of course, cheese. 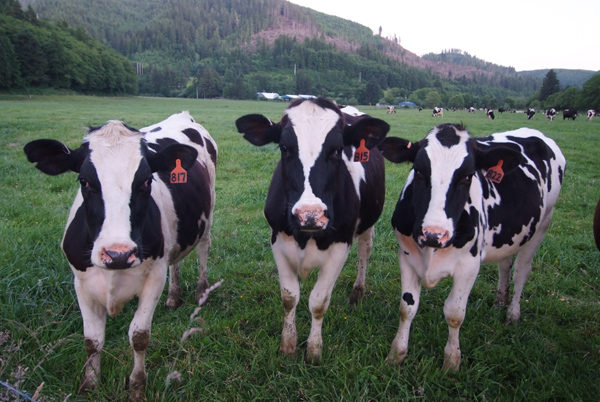 As home to the well-known cheese producer Tillamook, Tillamook County’s cheese-making culture is part of a tradition that goes back for generations. A collective of nearly 100 local farms owns and operates Tillamook. (Some of these farms are run by the original settlers’ great-great-great grandchildren.) And you can learn a ton about both Tillamook cheese and the history of the region at a free tour of the Tillamook factory. 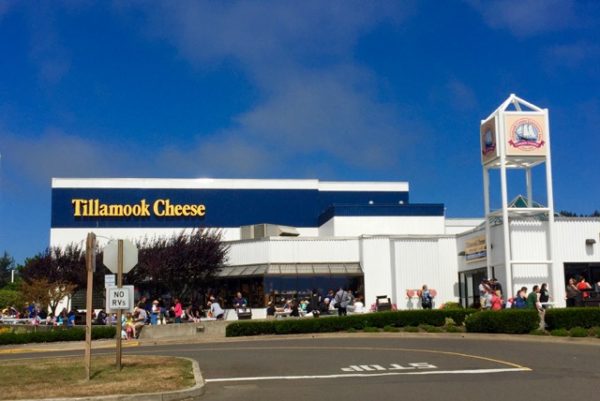 Tillamook cheese starts with the freshest possible milk. Workers collect the milk from local farms daily. The milk arrives within one hour of leaving the farm. The milk is then made into cheese usually within about 5 1/2 hours after it gets to the factory, and never longer than 24 hours. So that means the milk goes from cow to cheese in less than a day. 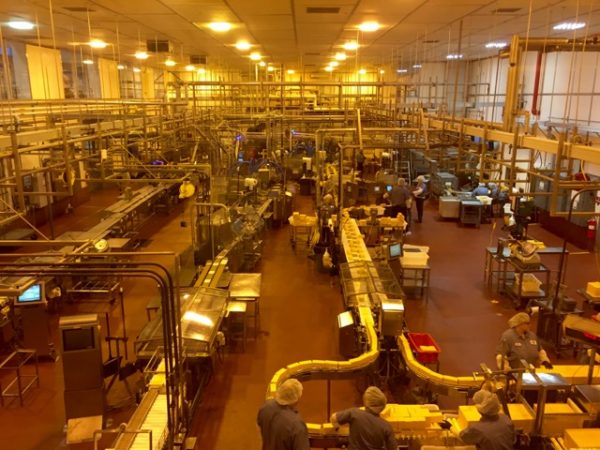 In the Tillamook factory, the cheese-making process begins with rennet, an enzyme that helps the milk coagulate and begin forming into cheese curds. From there, workers pump the curds and whey into the “Cheddarmaster” – a machine that begins setting, cutting, stacking, milling, and salting the cheese, while reducing excess moisture.

When the cheddar is complete, it goes into the aging room, where it ages for no less than 60 days (medium cheddar) and up to more than three years (sharp aged cheddar). The factory keeps an average 18 million pounds of cheddar in store; it then cuts and wraps about 1 million pounds of cheese per week. 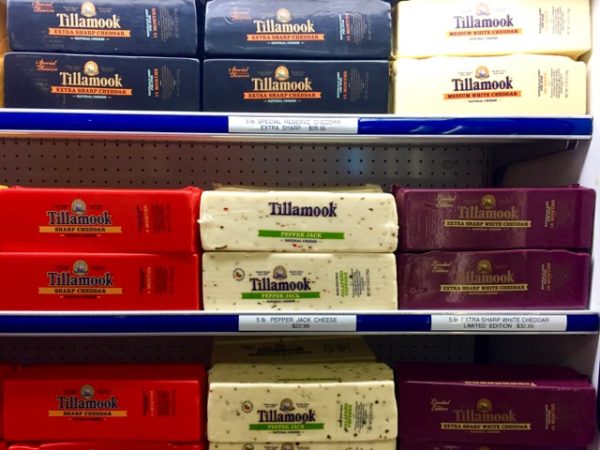 When you visit the Tillamook factory, you can sample a wide variety of cheeses and “squeaky” cheese curds. (They actually make a squeaky sound on your teeth when you eat them). 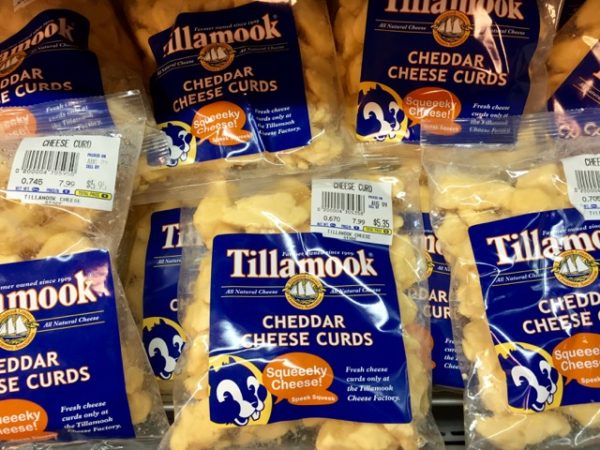 At our tour, our kids discovered that they had new favorites beyond traditional cheddar. Our 9-year-old was partial to the Extra Sharp White Cheddar. On the other hand, our 12-year-old decided that the Smoked Medium Cheddar was his new flavor. 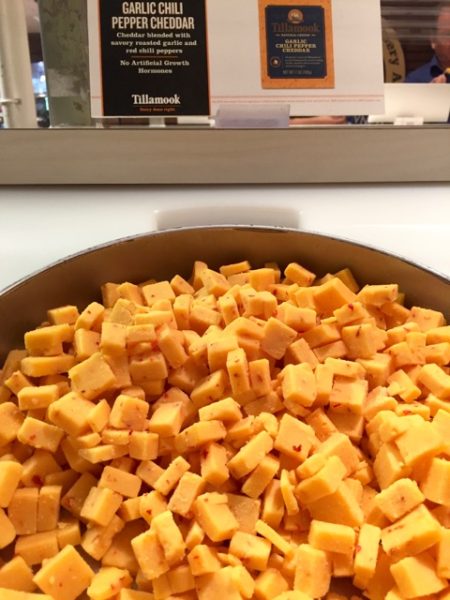 After you’ve whet your appetite on all that cheese, you’ll want to eat lunch at Tillamook’s cafe. You’ll almost certainly discover a new favorite when you try the deep-fried cheese curds. They taste a little bit like mozzarella sticks, but without a breaded exterior. 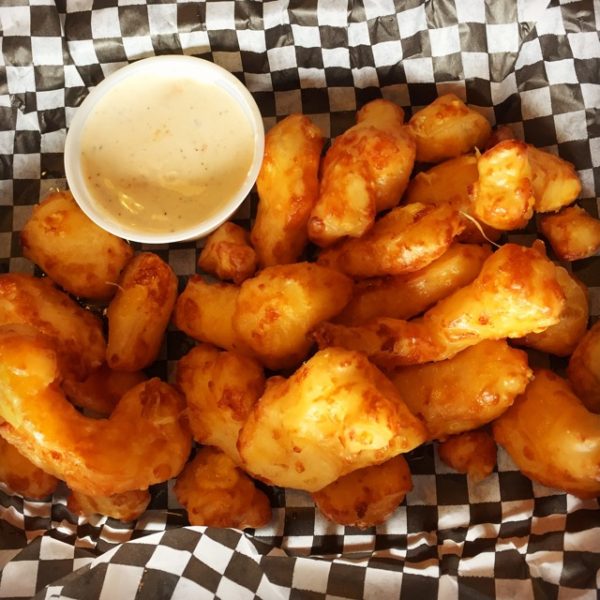 Grilled cheese fans also will find an amazing array of options, from cheesesteak to Hawaiian-style or pastrami grilled cheese. We chose a sandwich called “The Piglet,” which features a recipe from Heidi Gibson of the American Grilled Cheese Kitchen. It’s a grilled aged sharp cheddar sandwich with ham, caramelized onions, Dijon mustard, and apple butter on sourdough bread. And yes, it’s that good. 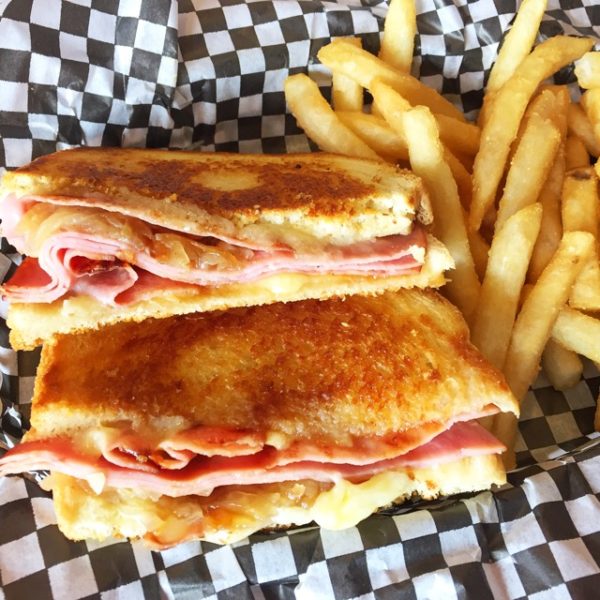 Of course there’s no way you’re going to finish off lunch without at least a scoop of the famous Tillamook ice cream. (Did you know that Tillamook Ice Cream is 13.5% butterfat, compared to the 10% found in typical premium brands? There’s less air whipped in to fill cartons. Therefore each carton weighs about half a pound more than the FDA standard.) We tried to recreate Tillamook’s iconic dripping ice cream cone image, but we were too impatient to wait for the ice cream to start melting; we just wanted to eat it. 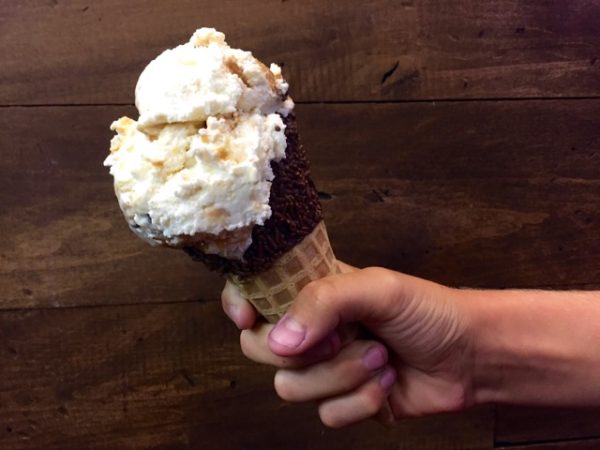 If you’re headed to the Oregon coast anytime soon, definitely make the Tillamook factory one of your stops (and come hungry!). You’re also in for a treat with phenomenal scenery and refreshing ocean breezes. 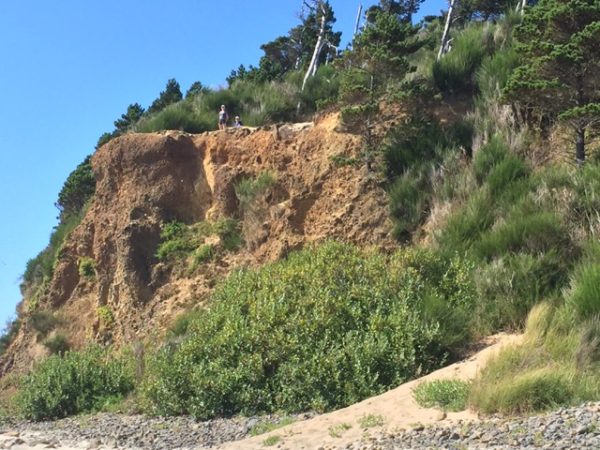 If you’re not headed to Oregon, but still love Tillamook, you can find it in most major grocery stores, as well as Costco.

Blogger disclosure: Tillamook treated my family to lunch when we visited the factory while traveling through the area. (Special thanks to Tillamook employee Duncan Fernandez for welcoming us and patiently answering all of our questions!) I did not receive compensation for this post, and all opinions expressed are my own.

3 Responses to Tillamook Cheese and the Oregon Coast