The Guru of Edible Gardening

Have you ever wanted to get serious about edible gardening? Then you should get to know master gardener Geri Miller and her company Home Grown Edible Landscapes. Miller’s gardening know-how and homespun wisdom have earned her thousands of Facebook fans across the country and internationally. And while she consults on edible gardening with some of the top chefs in the country, she still works with individuals and families to help them create gardens that give back year after year. If you are planning to start learning on how to grown your own food, you are lucky. Why? You do not have to spend a lot. Just the essential tools will do. Check out the reviews of Bob Robinson on https://bestofmachinery.com for more information on gardening tools and safety tips to using them.

“There is nothing that brings people together more strongly than digging in the dirt,” says Miller.

Touching on a Need

Miller is, by training, a U.C. Davis Certified Master Gardener and horticulturalist. Up until 2009, she had mainly been focused on volunteering in schools and working with nonprofits focused on children. But after receiving numerous requests from neighbors and visitors who admired her own garden, she started Home Grown Edible Landscapes (HGEL).  At the time, businesses were only barely beginning to discover the power of Facebook. But through her popular HGEL Facebook page, she managed to touch on a real need.

“This was the summer of 2009, at the height of the recession. I just had a sense of how many people were suffering,” she said. “I put up on the HGEL Facebook page, ‘If you want help learning how to grow your own food, let me know.’ I had no intention of charging anyone.”

The response to her offer was almost immediate – and enormous. “I spent all that summer driving around [Southern California], from Temple City, to Huntington Beach, you name it…I met the most wonderful people. These were people who, up until a few months prior, would have described themselves as middle class, and certainly not ‘food insecure,'” she said. “But people were losing everything. And for some, gardening was just a way to quiet their minds. You might equate it to another form of meditation. For others it was a way to put a meal on the table.”

Inspired and overwhelmed by her experiences of that summer, Miller wrote about her edible gardening journey for the Huffington Post. “I want to pass on to you what my Facebook friends have shown me, that no matter what challenge you face, you possess the talent and ability to change your life and that of those around you. Your belief in yourself will make it happen,” she wrote.

A Company is Born

From that point on, HGEL continued to grow, “to a point where it was no longer a hobby,” said Miller. “But it came from a really soulful place.”

Miller began one of her first big commercial ventures on a chance visit to Terranea Resort in Rancho Palos Verdes. (There, she also met Love & Salt Chef Michael Fiorelli, who was the chef at mar’sel restaurant at the time). Miller walked by the restaurant and saw potential. “I said, ‘There are raised beds here – How cool is that!’ But they were filled with dead plants.”

Miller wrote to the top brass at Terranea and offered to design, plant, and maintain the garden at the restaurant for one year – for free. In exchange, she would post a small HGEL sign and put her business cards on display. “I wound up staying for five years – That was my first commercial account,” she says.

That same year, she walked through downtown and the north end of Manhattan Beach, CA and looked for potential garden plots. “Anywhere I saw a shop that had a space, I made the same offer. I ended up at Reaney Design Co,, Four Daughters Kitchen, and Elegance Spa.”

As the edible gardening business grew, she got larger clients elsewhere in Los Angeles. A partnership with Chef Govind Armstrong and owners Brad and Linda Johnson at Post & Beam Restaurant in Baldwin Hills yielded a new restaurant garden, a series of classes, and an article in Sunset magazine.

The Cook’s Garden by HGEL

She consulted on a second restaurant partnership (now Armstrong/Johnson’s Willie Jane) on Abbott Kinney in Venice. Then she had the idea of developing the vacant lot next door into The Cook’s Garden by HGEL, an organic ‘urban farm’ for chefs on the block.

The Cook’s Garden by HGEL now has 33 raised beds offered to local restaurants for subscription. It also offers a retail nursery (edibles only), greenhouse, garden shop and a chicken coop with 16 chickens. 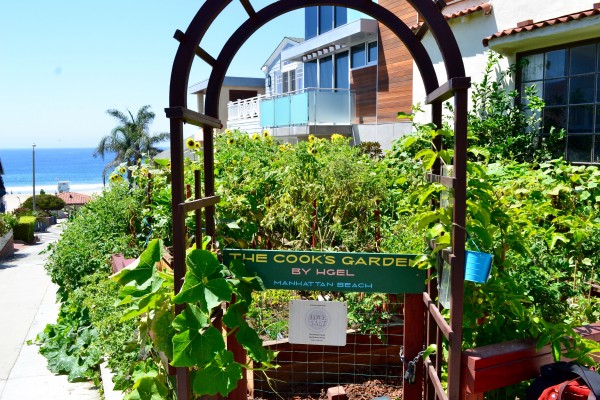 “The most amazing thing about working with Geri is how much I’ve learned throughout the whole process,” said Chef Fiorelli. “When a chef and a gardener have a close relationship, it’s crazy how you can affect the product. We are actually able to manipulate the flavor profile of our foods.”

For example, Fiorelli remembers a day when Miller had him sample some red veined sorrel out of one of the garden beds to get a sense of the flavor he was after. She had him taste a larger leaf which he said he liked, but he thought it a bit of a bitter aftertaste. Then she handed him a younger, smaller leaf that had exactly the bright, lemony taste he was after. “She said ‘Then that’s exactly the size leaf we’ll harvest for you.’ Moments like that just blow me away.”

And Fiorelli is thrilled to have custom produce almost literally at his fingertips. “In the end, it’s us working together to put the best possible product on the plate. It’s the collaboration that makes it fun. Without it I’d be at the mercy of Mother Nature,” said Fiorelli. “I’m lucky enough to have Mother Geri watching over my produce. Every chef should be so lucky.”

Miller has several new restaurant partnerships in the works. In addition, she continues to do consultations for individual gardeners through the HGEL business. She has also published “The Timber Press Guide to Vegetable Gardening in Southern California” (Timber Press).

A longer version of this profile originally appeared in our sister website, DigMB.

Farm Fresh To You (And Us)
Banana Shakes and ‘Shelfies’

2 Responses to The Guru of Edible Gardening