If it’s the dead of winter, where are you going to get your fresh fruits and vegetables? In many cases, you can thank desert farming. Throughout the low desert of California’s Imperial and Coachella Valleys, the crops flourish in wintertime. 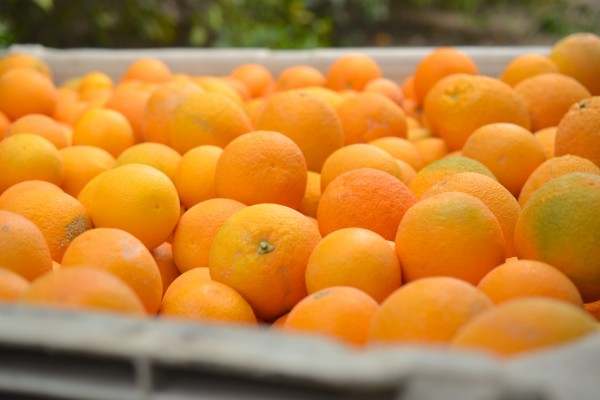 Farming in the Coachella Valley

To many people, the Coachella Valley conjures  an image of either dry and sandy desert (true) or lush manicured golf courses and lawns (also true). But not many realize that it’s one of the state’s largest crop-growing regions as well.

The Coachella Valley gets its water from the Colorado River via the Coachella Canal. The 123-mile Coachella Canal and its underground water delivery system irrigate nearly 60,000 acres of farmland. Water travels down the canal entirely by gravity, eliminating the need for costly electrical pumping. And, as they say in the desert, “Every drop counts.”

More than 60 percent of area farmers use drip irrigation or some other form of micro-irrigation, the most efficient way to water crops. “Without this water, there probably wouldn’t be anyone in Coachella Valley,” says Dennis Jensen of Coachella’s Mesa West Ranch. 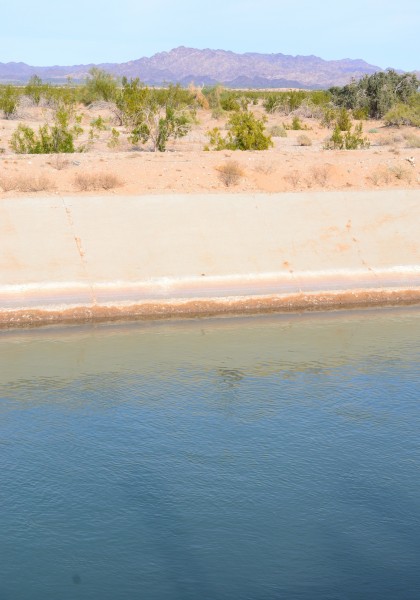 The Coachella Canal, lined with concrete to prevent seepage into the ground, has a stunning desert backdrop.

On the first leg of our desert farming tour, we had a chance to view Jensen’s citrus and date palm trees at Mesa West Ranch. Jensen’s trees use drip irrigation. This technique works well for desert trees like date palms that need water at the roots but don’t like humidity or water on their branches. 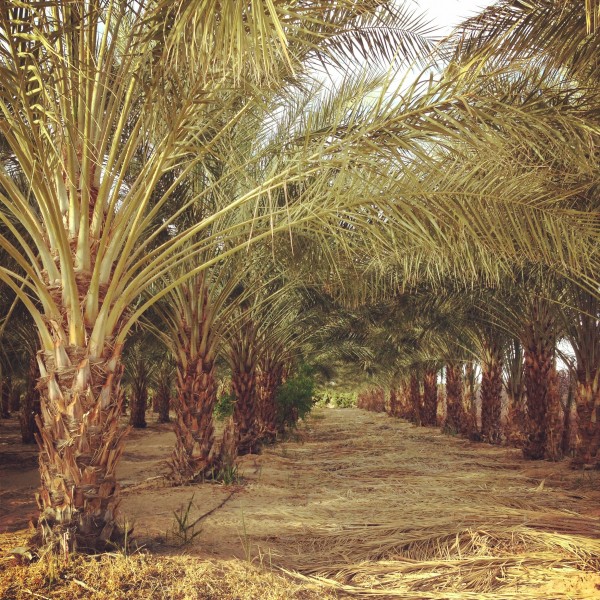 Walking through a date orchard is an incredibly dream-like experience. Nevertheless, you have to be careful because those pointy thorns that come off the trees are as sharp as knives. (In the early spring, workers hand-pollinate the male and female trees to prepare for a fall date harvest.)

At the ranch, we saw both Medjool and Deglet Noor date palms. Most people like to eat the sweet, soft Medjool dates out-of-hand, but the drier Deglet Noor dates are better for use in baking.

Growing Peppers in the Desert 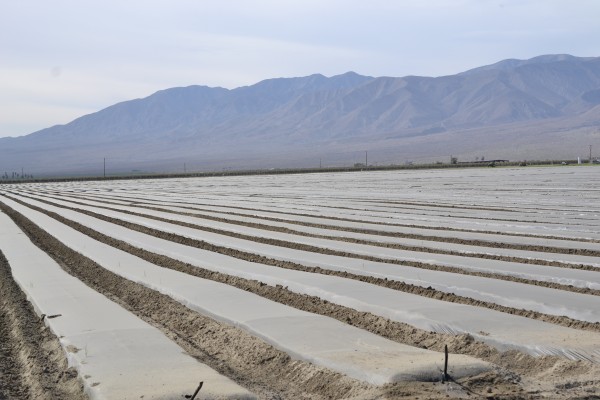 A desert pepper field gets prepared for planting – Note the plastic mulch and the ends of the drip irrigation sprinklers standing at the end of each row.

Next we moved on to the desert pepper crop, which we learned about from Ellen Way of Prime Time Produce. Prime Time is the largest year-round grower, packer, and shipper of multi-colored peppers in the country. You have most likely seen their products at Costco, Safeway, Whole Foods, or one of your local grocery stores. These pepper crops grow in raised beds wrapped in plastic mulch. Drip tape runs through the beds to provide drip irrigation to the pepper plants. 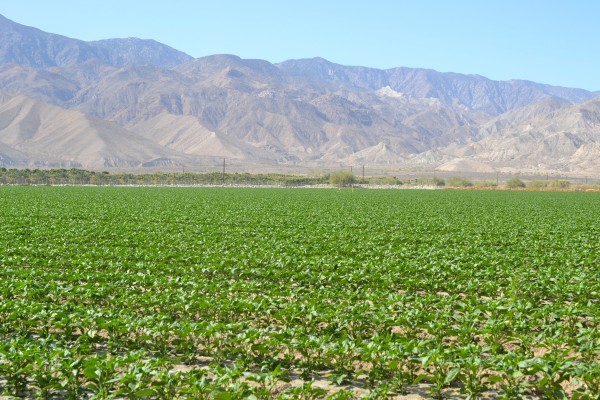 Once planted, the pepper crop grows under the watchful eye of the mountain.

Prime Time also spaces out the growing season by cultivating another crop of peppers in an indoor mesh greenhouse.

“We control everything in this environment,” says Way. “It allows us to fill a season.” This kind of greenhouse can provide roughly four times the crop of a regular farm – but at four times the cost. And yet, Way notes, this method could represent the future of farming. It could be ideal, say, in an urban area where a mesh greenhouse could be built on a rooftop. 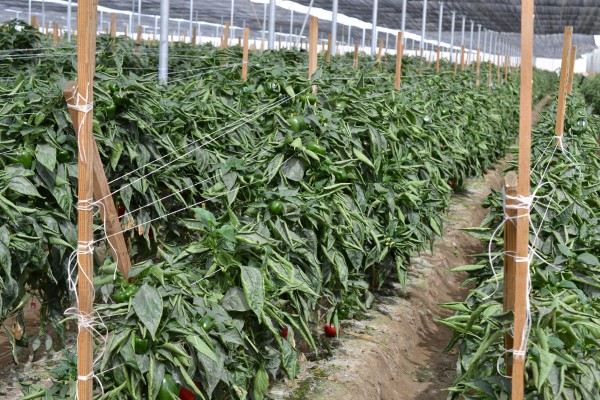 35 acres of peppers grow inside this mesh greenhouse

Nevertheless, the drought issue continues to threaten California’s crops. But Way says that new irrigation methods, particularly drip irrigation, have made it possible for farmers to do more with less water. “In Coachella Valley, farmers use slightly less water that we did 50 years ago and we grow four times as much product,” says Way. 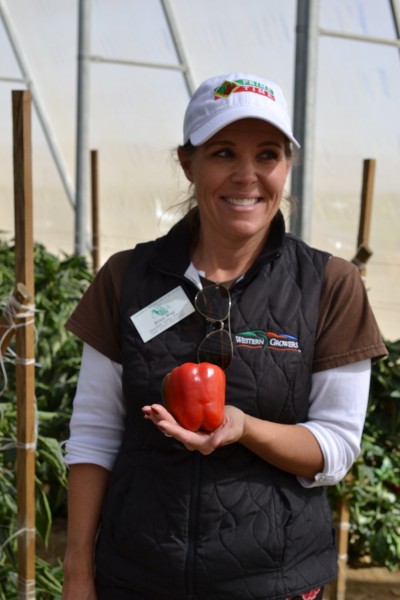 That parallels with statewide figures compiled by the Calfornia Farm Water Coalition. Those figures show that agricultural production has increased by 58.5 percent in California between 1967 and 2007, while applied water in agriculture declined 14.5 percent over that same time period. Additionally, from 2003 through 2013, California farmers invested more than $3 billion upgrading the irrigation systems on more than 2.6 million acres. “I don’t think there’s a farmer out there who says, ‘How much water can I waste today?'” adds Way.

So if you’ve ever wondered how fresh fruits and vegetables grow in a desert climate, now you know. It took years of careful study and water planning. And yet now farmers are able to deliver all of those fresh fruits and veggies that we’ve come to expect, at a reasonable price, throughout the year.

P.S. Curious about more winter farming? Here’s our recap of farmers growing spinach and lettuce in the Imperial Valley.

Many thanks to the California Farm Water Coalition for the desert farming tour. We did not receive compensation for this post. All opinions expressed are our own.