Green Beans and ‘The Illustrated Wok’

When is it just as much fun to “read” a cookbook as it is to cook the recipes? When your cookbook is “The Illustrated Wok,” which doubles as both a cookbook and a work of art. 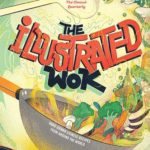 “The Illustrated Wok” is a Chinese cookbook, but calling it that alone seems an understatement. The book was put together by a thoughtful group of editors and writers at The Cleaver Quarterly, an online journal of contemporary Chinese cuisine. The editors began by reaching out to 40 “next-generation” chefs, asking each to choose one restaurant-quality recipe that reflected their deep connection to Chinese cuisine. Next, they assigned each recipe to a different illustrator, giving them the challenge of using their art to bring the dish to life.

Why illustrations? As the editors put it, “Illustrators can make your mouth water with photo-realistic renderings, but they go beyond photography in their ability to conjure up unreal scenes, bring metaphors to life, sculpt space, and collapse time.” The result is a book that is both beautiful and widely varied from page to page, with images ranging from classical to pop art to fantasy.

Detail of pages from “The Illustrated Wok” with illustrations from Carolyn Phillips, Christina Chung, and BlackSuen

We received this book as a gift and it was such a delight we couldn’t wait to a) just sit down and read the whole thing; and b) cook recipes from it. What better response could you hope for from a cookbook?

We picked a recipe that was relatively easy and required fairly basic ingredients that most of us would either have on hand or easily be able to purchase. The recipe – Dry Fried Green Beans with Charred Ginger & Peanut Sauce – borrows from Sichuan tradition but takes it in a new direction. Traditionally these beans would be deep-fried. Instead, the recipe calls for stir-frying the beans in wok and then flavoring them with a zesty peanut sauce. 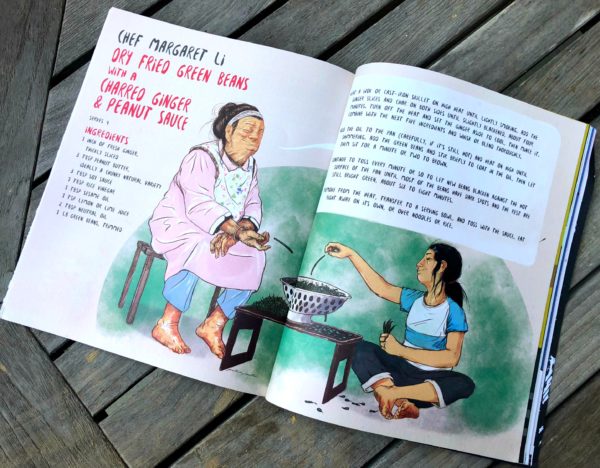 A quick and easy green bean dish that kids can help to make.

How did it turn out? This recipe is super-tasty, super-easy, and (perhaps best of all) super-fast. And as you’re letting the beans char, you can possibly do double duty on another cooking task, like working on a main course or some rice. 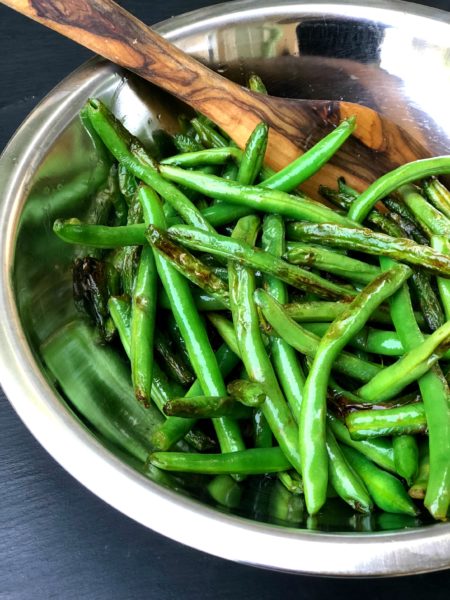 Want to incorporate the kids into the cooking process? Chef Li recommends having your youngest kids snap the ends off the beans for you. Young kids can also help put together and whisk the peanut sauce. Last but not least, your older, stove-competent kids can supervise the stirring of the beans in the wok. 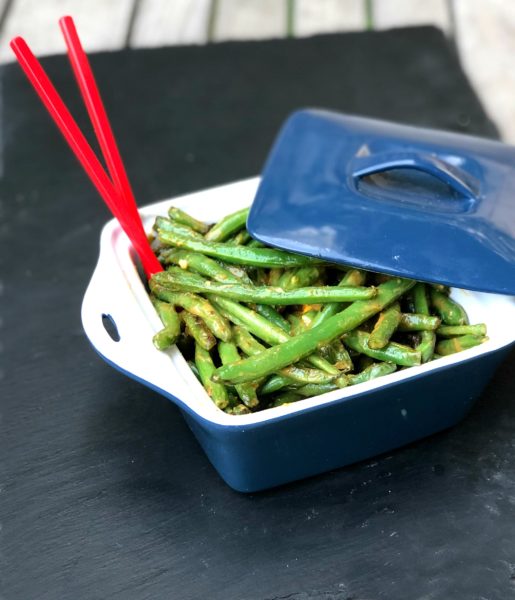 We’ll be spending more time curled up with this book in the next few months, so we’ll let you know if we have more favorite recipes. In the meantime, if you want your own copy, you can order one for $25 from The Cleaver Quarterly here.

Blogger disclosure: This cookbook was given to me as a gift from a family member. This post represents my opinions alone. I have no affiliation with the book or its publishers.

2 Responses to Green Beans and ‘The Illustrated Wok’