So, we have a new Hatch chile recipe for you, which is a Hatch chile agar agar noodle bowl with salmon and teriyaki.

[Record scratch] Hold it! Hatch chile what-what?!?! OK, this is going to take a little bit of explanation. Bear with us while we walk through the story:

First, Hatch chiles are special chile peppers that are grown exclusively in Hatch, New Mexico. The climate is brutally hot there  during the day and very cool at night. This results in a pepper with an unusually meaty flesh and a distinctive flavor. Hatch chile season lasts from mid-August to late September, culminating with a massive festival in Hatch every Labor Day. And during Hatch chile season, there are Hatch roasting festivals at supermarkets across the country.

Together with our 11-year-old, we came up with the idea of making Hatch chile apple pie. Imagine our surprise, then, when we rolled into a chile roasting and the first item we saw was Hatch Chile apple pie. [Sad trombone.]

Now pause that story for a second and flip over to a recent chef challenge we watched with our teenager: A chef had to come up with a way to use an obscure ingredient – so he pureed it, mixed it with agar agar (a gelatin that does not use animal products), spread it out, chilled it, and sliced it out into noodles. Agar agar noodles are surprisingly easy to make  AND they’re a nice gluten-free alternative to noodles.

So that got us thinking: What about gluten-free agar agar noodles made with Hatch chiles? Why not?

So to make these noodles we took a few roasted Hatch chiles, seeded them, and scraped off as much of the charred black skin as we could.

Then we pureed them with chicken broth – enough to make one cup total – and then boiled the mixture with agar agar. Next we spread them out on a cookie sheet, chilled the whole thing, and then sliced it all into “noodles.” Voila!

Remember that these noodles are essentially gelatin. They’re not going to have the firm texture of regular noodles – they’re going to melt in your mouth. They also won’t stand up to heat. That’s why recipe is best served with the salmon slightly cooled, or at least not straight off the grill. 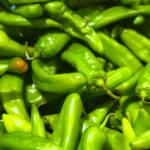 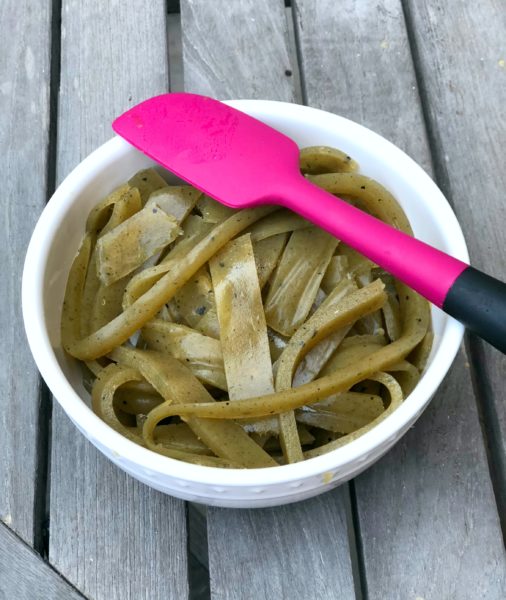 Tip: Make sure that the gelatin is plenty firm before you slice it, and handle it with a light touch. 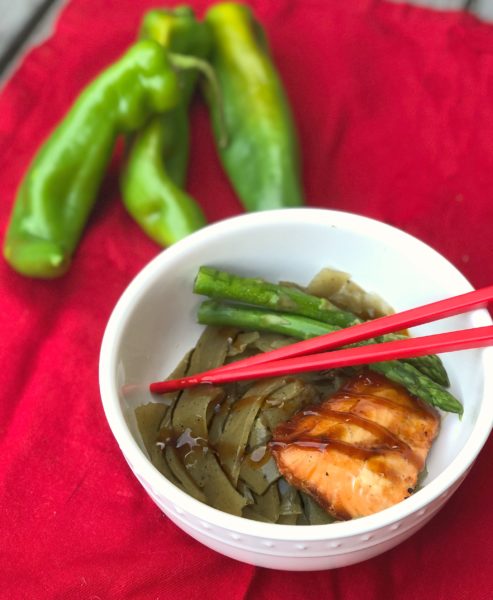 So there you have it – a Hatch chile agar agar noodle bowl. What crazy thing should we do with Hatch chiles next?

Blogger disclosure: Melissa’s provided us with Hatch chiles from a local roasting. I did not receive compensation for this post. All opinions expressed are my own.