Day in and day out, we hear the urging to “eat your vegetables.” But could an entirely plant-based meal become a multi-course feast at a high-end restaurant? If you thought “no,” think again. Plant-based menus are a growing trend even at the fanciest eateries. And chefs are stretching their creative muscles to create new and innovative dishes using only plants.

That’s the conclusion we came to after visiting the “Eat Your Vegetables Dinner” held on a recent Monday night at Manhattan Beach Post. MB Post, is headed up by Michelin-starred and award-winning Chef David LeFevre. Chef LeFevre and his team challenged themselves to design a uniquely tasty vegetable-only dinner. Then they took that challenge a step further to ensure that there was almost no food waste. That meant using all parts of the vegetables, including seeds and stems that went into broths and stocks. 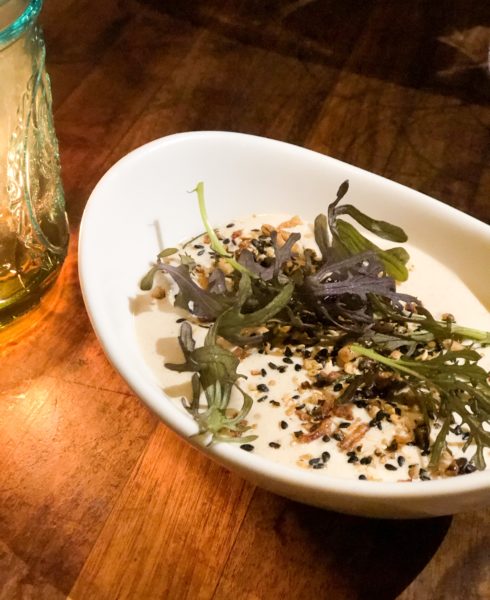 The dinner began with a dish of roasted Brown Turkey figs and chilled eggplant, served in a bowl of white sesame tahini whipped to a super-light cream. (The garnish on top is frilly mustard greens and toasted sesame seeds.) The cream was so frothy that we thought there must be some dairy in it, but it was just aerated and super-light tahini. 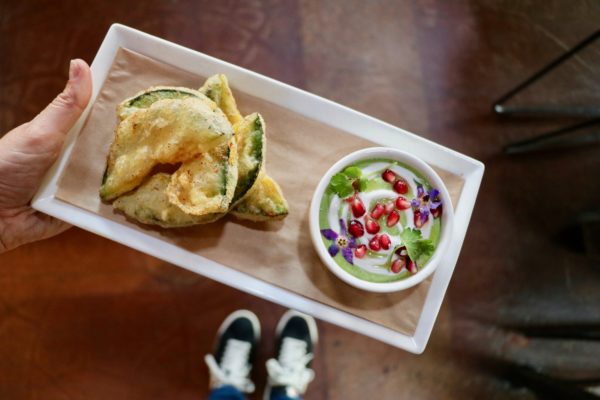 Next came one of the prettiest courses, a kabocha squash tempura served with a beautifully colored dip of lime crema, aji verde, and pomegranate. Did you ever have to force a kid (or were you the kid who had to be forced) to eat squash? That wouldn’t be the case with this light and crispy squash. At our table, we all jockeyed for the last piece (and we ate every last drop of the lime crema). Sharing the stage was a plate of roasted root vegetables that included caramelized Tokyo turnips, charred radishes, and sweet potato, with a citrus chimichurri.

It was at this point that we asked LeFevre where he got his inspiration for choosing and pairing vegetables for a plant-based feast. He told us that he looks for what’s fresh at the farmers’ market as his starting point. And from there, he said, his motto is, “What grows together, goes together.” 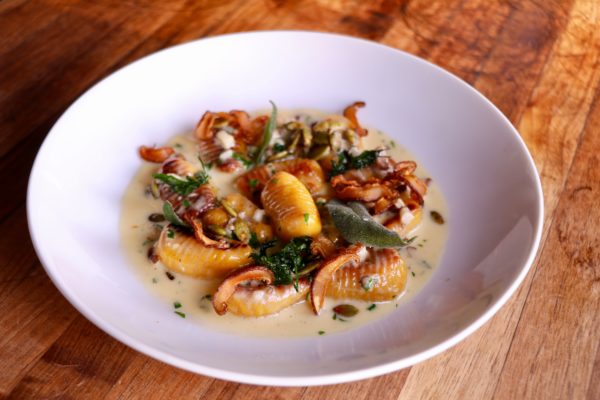 The main course featured a gnocchi made from fall squashes, garnished with smoked shiitake mushrooms and sage. There’s something perfectly satisfying about gnocchi. And when it is flavored with squashes and served with mushrooms, it becomes the ultimate fall comfort dish.

Next, a platter of slow-roasted matsutake mushrooms came with a soy ginger scallion glaze, chestnut hummus, and barley tabbouleh. These mushrooms were large and meaty – it was as if a steak course had appeared at our table, but with a more hearty, earthy flavor.

It was hard to believe we had any room left after the other courses, but the dessert was too tempting to pass up. This creme brulee was not just any creme brulee. Made with parsnip and coriander, it came with a topping of candied hazelnuts and a crispy bourbon caramel layer. By the way, don’t balk at parsnip. It’s similar to a carrot in that it has a very subtle sweetness. It transforms the traditional creme brulee by giving it a nice earthy sweetness.

In keeping with the “zero-waste” theme of the “Eat Your Vegetables” feast, the restaurant encouraged diners to “BYOTB.” (Bring Your Own Take-Out Box.) However, after the evening was over, we didn’t have a morsel left on our plates to spare.

Although our table came fully prepared for a vegetable-only dinner, not all of the guests were in the know. At a table next to us, three women had brought dates who were oblivious to the special menu. The companions did a collective double-take when they found out that only plant-based foods were in the offering. But by the end of the evening, they had enjoyed every course and they were sold on the concept. Maybe it wouldn’t be too difficult to have every Monday be a meatless Monday from now on?

Blogger disclosure: MB Post treated Jolly Tomato and a guest to dinner. We did not receive compensation for this post. All opinions expressed are our own.

P.S. If you’re sticking to a plant-based diet, you will probably love our Vegan Protein Banana Bread.