Entering A Pie Contest – The Highs and the Lows

Everyone loves a good pie contest. And just about everyone loves Tim Burton. So when I heard that this year’s KCRW Good Food pie contest was running a “pies inspired by Tim Burton” category (tying in with the Tim Burton art exhibit at LACMA), I knew I had to jump in. Who could resist such a great creative challenge?

As soon as I started looking through Tim Burton’s amazing artwork, I knew exactly what my theme was going to be. He has this crazy-sad sketch called “Mr. Happyface Remembers Better Days” with a moon-shaped face that is just begging to be transformed into a pie. 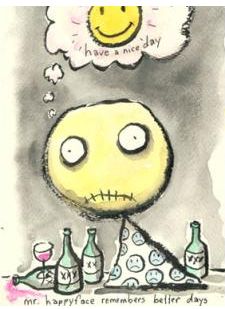 I originally thought that the yellow filling might need to be banana cream, but I decided that something a little more bittersweet like lemon cream would be more fitting. Then I paired it with a chocolate crumb crust (crumbling life – get it? Bonus points for ham-handed symbolism). Three test pies later, “Mr. Happypie” was born. 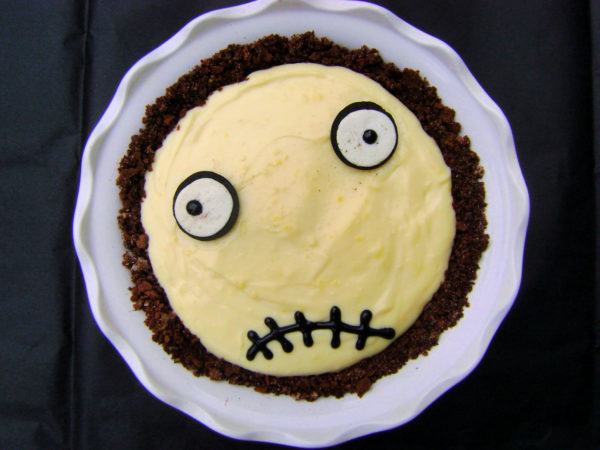 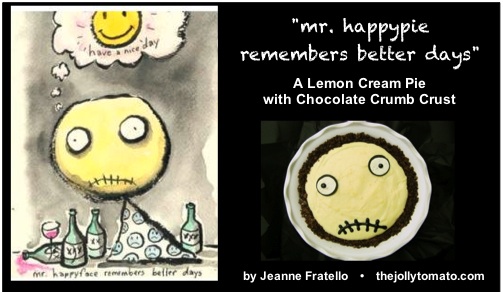 I dropped off the pie on the morning of the contest and gave the pie-handlers the above sign to accompany it. Rookie error alert! The pie needs to be anonymous for the judging process, so the sign was a deal-killer. And sure enough, at some point in the handling/judging process, the sign disappeared. A real forehead-smacker. So Mr. Happypie had to stand on his own. 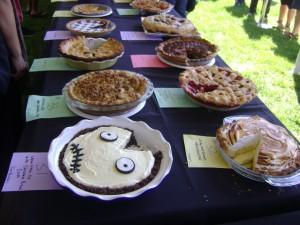 When I arrived for the official contest later that afternoon, the crowd was absolutely overwhelming. More than two hundred pies filled the tables under a large tent, and far more than two hundred people were lined up next to it waiting to see and taste the pies. I found Mr. Happypie and I started to worry for him. He looked even sadder with the slice cut out of his head. And with his sign gone, it’s likely that no one knew who he was supposed to be. Anxiety attack: Should I have written more on the purple card? Should I have made him into a more recognizable Tim Burton character, like Edward Scissorhands? 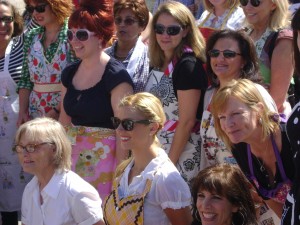 Thankfully, I got a little break from my neuroses because just then they started calling people to line up for the apron fashion show. I’ve never entered a pie contest, and I’ve never been in a fashion show, so this was a day of firsts for me. And with the apron paparazzi snapping away, it was hard not to get caught up in the celebrity feel.

Was It A Finalist?

And then, it was time to serve the pies. If your pie was gone from the table, it meant that it was a finalist. And my pie was…still there on the table. (Sob! But it was so creative AND tasty!) 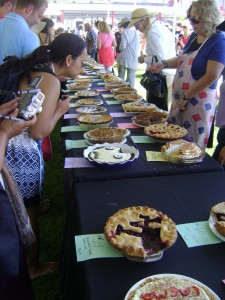 But I had to shake it off because there were people to feed…and feed…and feed. There were hordes of people that just kept coming and coming and lining up for free pie. Mr. Happypie was gone in a matter of minutes, and all that was left were a few chocolate crumbs. 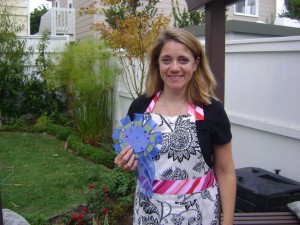 But the highlight of the day was waiting for me when I got home. My three favorite guys – the one who married me and the two little ones we had together – waited for me with this enormous blue ribbon that they had made. I think this was their way of saying, “We think your pie was the best, Mom! Now will you please make us some dinner?”