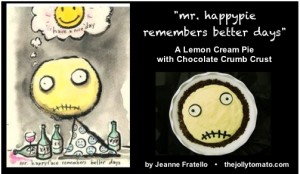 In a small bowl, mix graham cracker crumbs and sugar, add melted butter and stir until combined. Press into a 9- to 10-inch pie pan. Bake at 375 degrees for 10 minutes. Let cool.

For the filling: (adapted from Chaos In the Kitchen’s Lemon Sour Cream Pie)

Combine sugar, cornstarch, lemon juice, egg yolks, and milk in a large sauce pan. Heat over medium heat, whisking constantly, until the mixture becomes very thick (about 10 minutes). Remove from heat and stir in butter until the butter is melted. Let cool for 10 minutes. Fold in sour cream.

Chill a large mixing bowl and beaters in the freezer for about 10-15 minutes. Then remove the bowl and beaters and set up your mixer. Beat the whipping cream on medium-high speed until stiff peaks form. Carefully fold the whipped cream into the lemon cream mixture. Carefully pour the mixture into the pie crust. Chill for at least two hours or until ready to serve.

Optional: After the pie has chilled for at least two hours, open two Oreo cookies for the “eyes”; decorate with black writing gel/icing for the pupils, and press onto the pie. Use the writing gel to make a “mouth.” Chill for at least another hour.