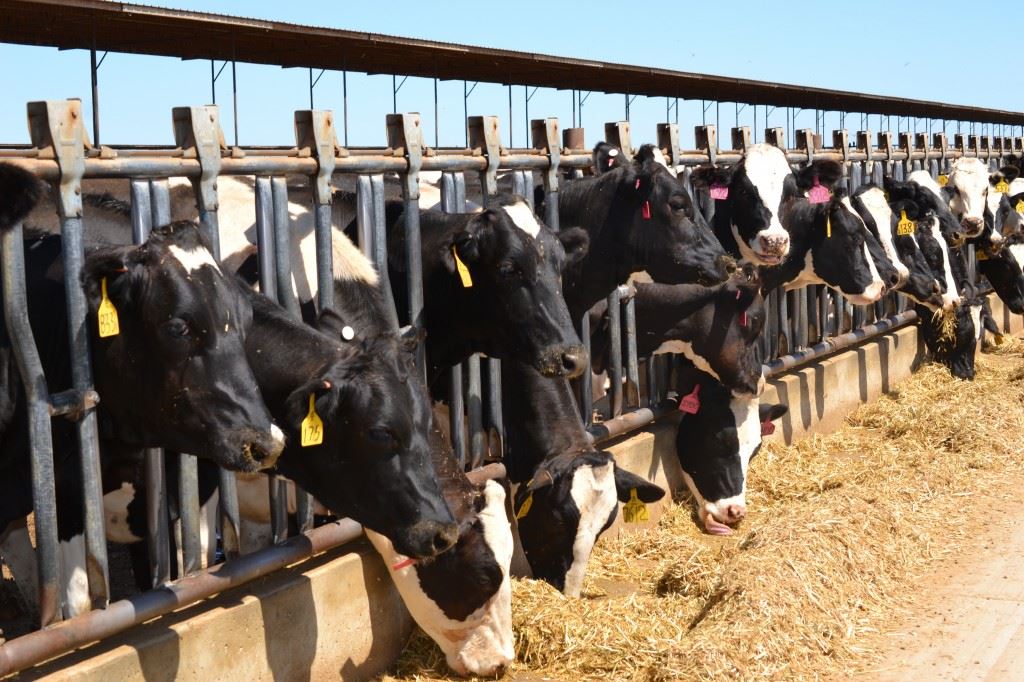 Editor’s note: In this issue of Real Food Summer, we visited Bellanave Dairy, a 7,000-acre farm near Bakersfield, CA.

“How do you get milk from a cow?” goes one of the running jokes in our house. “You just right-click on it.”

Of course our kids don’t really think this, but they might as well, considering how close they get to anything farm-like during the day. As far as they’re concerned, milk comes in gallon jugs that are either at the store or at our doorstep on delivery day. They don’t see any cows involved in the process. 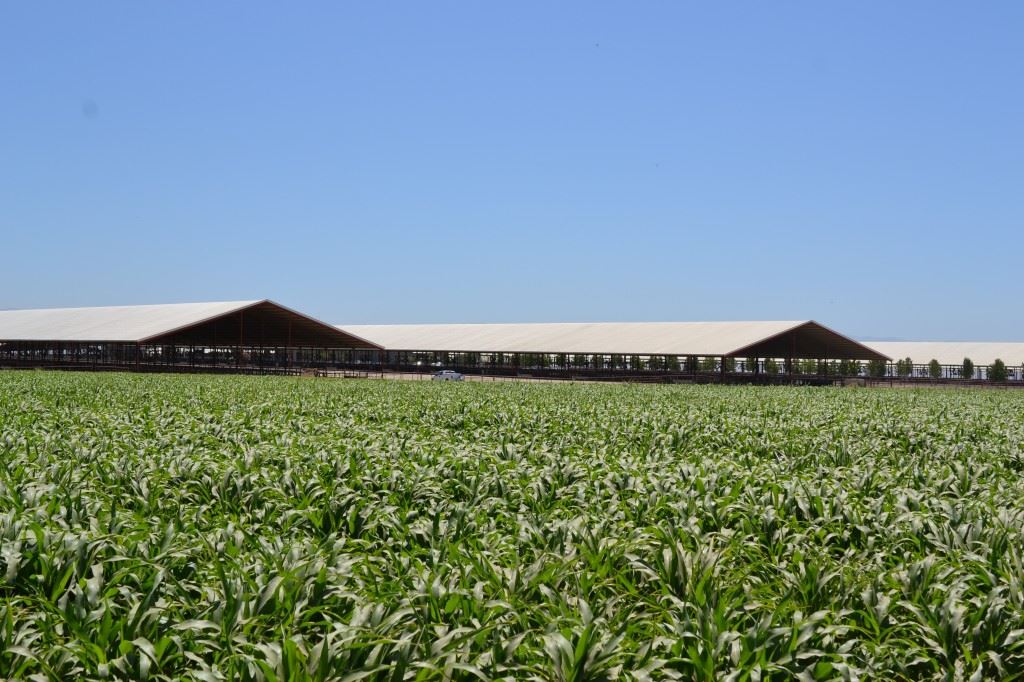 So to learn more about how milk gets from cow to cooler (farm to fridge?) we visited Bellanave Dairy farm.

George Borba, a third-generation dairy farmer who practically has milk in his veins, runs Bellanave. He grew up learning the ins and outs of dairy farming from his father and grandfather. Now he continues the tradition with his children at his cutting-edge dairy operation. 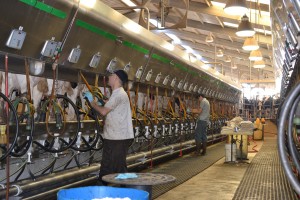 The scope of the operation is astonishing. Seven thousand cows that produce 12 tanker trucks of milk each day. Another 7,000 cows wait in the wings to become milkers. The cows maintain a tightly controlled schedule of when they eat, hang out, and get milked. “Cows are creatures of habit,” says Borba. “They want to get fed the same way and milked at the same time each day.”

Each cow bears a special tag, and a sophisticated computer system tracks each cow and its milk output. 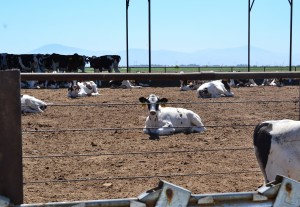 Although we arrived on a morning when it was nearly 90 degrees, the cows seemed quite comfortable. They primarily hang out under large open-air coverings that have fans running at full force. A machine also sprays down the cows at intervals. (This is how they release heat, because cows don’t sweat.)  The cows only get “locked up” for one hour each day. This allows each cow to have a either vet check-up or other coding or recording. “You want a milk cow to be either lying down, drinking water, or eating food,” says Borba. “The more comfortable you make them, the more they want to eat, and the more milk you get.” 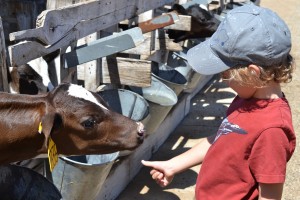 We found it surprising how much time Borba and his team spend on cultivating the crops that the cows consume. Each cow eats a specially calibrated mix of grains depending on how many calories it needs. (A cow in in a high-milk-production stage of its life will need more than one that is slowing down.) There’s a special art to growing and storing the right kinds of feed in the right quantities. The farmer needs to get it exactly right so that the cows don’t get fat or unhealthy. (Incidentally, these cows do not receive any hormones or antibiotics. If a cow is ill and needs antibiotics, it is removed from the milking rotation.) 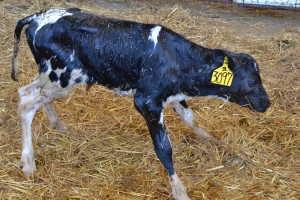 What does a dairy cow’s life cycle look like? Cows give birth to their calves on the farm. Then the calves grow up at a special calf farm for 130 days. (We were fortunate to see a newly birthed, one-hour-old calf stand up on wobbly legs for the very first time.) When a calf returns to the dairy farm, it hangs out with other “teenagers” before it begins its life as a dairy cow. The cows produce milk for about 305 days per year. Then they get a two-month “resting period” during their last two months of carrying a calf. They have a total milking lifespan of about four and one half years. When that time is up, farmers generally sell them off for beef. 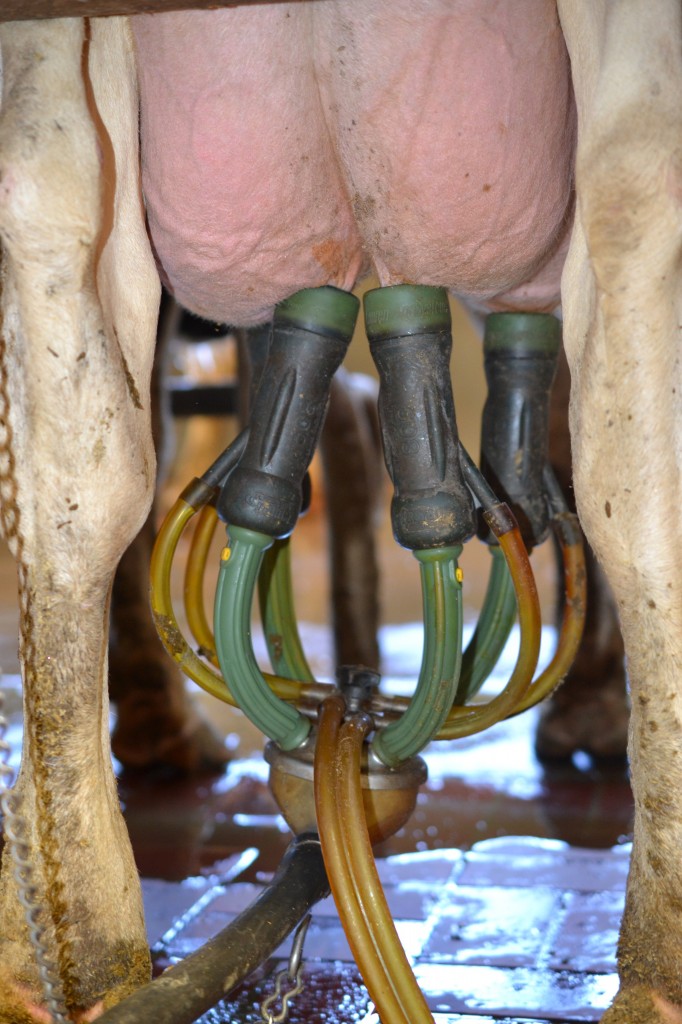 So how does the whole milking operation work? The cows walk in to a central milking “parlor.” They line up, go through a disinfection process, and then hook up to a milking machine. It’s a fascinating kind of assembly line. The cows stand patiently (more or less; we saw one or two cows kick off the milking machine) while the machine pumps the milk through pipes and into a central holding chamber. 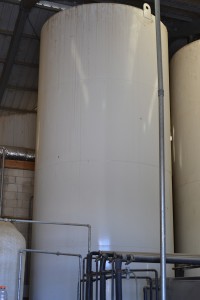 The milk then gets cooled and stored in large tanks until special tanker trucks come to pick it up (still in raw form). Bellanave is part of a milk cooperative that sells to other entities. Some of the raw milk becomes butter or other milk products. The rest of the raw milk goes through the pasteurization and homogenization processes. Then large grocery chains sell it under a store label. For example, Bellanave produces some of the milk that goes into Challenge Butter (one of the butters we frequently see at our supermarket).

After we watched the milking process (my friend from unclutterer recorded it), we asked about trying the raw milk. Many people tout the health benefits of raw milk (and Borba himself has enjoyed it his whole life). However, the bacteria in raw milk can make some people dangerously ill. Borba asked us not to drink it because he didn’t want us taking any chances.

Now for a sensitive question: Does the farm stink? Honestly, not any more than the usual farm smell. Bellanave was the first dairy farm in the country to do an Environmental Impact Report (EIR). The farm continues to be scrupulous about keeping conditions pristine and environmentally sensitive. For example, while the cows are away at the milking parlor, a special vacuum machine – curiously named the “Honey Vac” – regularly comes through the barns and vacuums up the manure. The manure later goes over the crops as fertilizer (“Rural recycling,” Borba calls it). 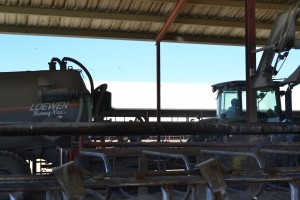 Even on a blisteringly hot day, the only time we could smell anything even vaguely farm-like was when we were up close and personal with the cows. “Clean water, clean feed, clean beds…If I didn’t take good care of these cows, I’d be out of business,” says Borba.

It’s an interesting thing to see your food being produced up-close and personal. On the one hand, it’s great to feel the confidence in knowing that all of the animals at Bellanave Dairy are being treated humanely and the process is extremely clean. On the other hand, it makes us think twice about consuming the products from a larger mass-production facility that might carry out its business without as much care or attention to the animals. One thing is for sure: It will be hard for us to look at a gallon of milk again without thinking of the cows that produced it. And we’re going to be extremely selective from now on about asking where our milk comes from.