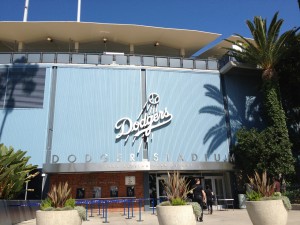 When people go to a baseball game, they eat hot dogs and maybe some peanuts and Cracker Jacks, right? Well, sure, but Dodger Stadium treats are so much more than that. In fact, Dodger Stadium is one of the Major League stadiums leading a revolution toward better, healthier, and more varied foods. 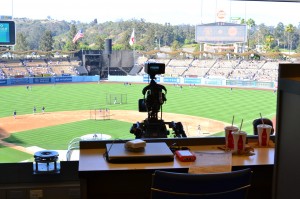 When the L.A. Dodgers invited the Jolly Tomato to a behind-the-scenes food tour of the baseball stadium, we were thrilled to take part. Levy Restaurants, the official restaurant partner that provides food and beverages at Dodger Stadium, is a leader in stadium food. (People actually come up to two hours early for a game to have enough time to eat the Dodger Stadium treats.) 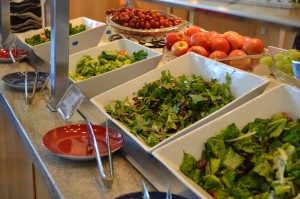 A salad bar at the Stadium Club

If you’re lucky enough to have some of the high-end seats, you can dine at the exclusive Dugout Club (for dugout season ticket holders), the Stadium Club (a members-only restaurant for season ticket holders), the Prime Ticket Club for special box-seat ticket holders, or in the sky-high suites. On a tour of these areas we saw some amazing salads. (Seriously – who would expect to eat mache and red oak salad at a ballgame?). We also saw carving stations and the most spectacular dessert cart you can imagine. 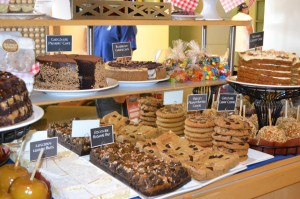 For us mere mortals, a.k.a. the regular ticket-holders who want to explore different food options, there are a range of different options at the various food stands throughout the stadium. (You can move around the stadium almost anywhere you want to go.) 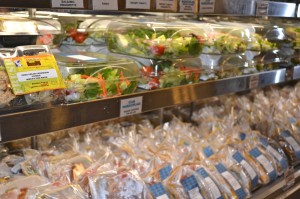 Salads and sandwiches at the Club Marketplace

If you are a vegetarian, vegan, or gluten-free eater, you *do* have choices. At the Club Marketplace on the club level, you’ll find a variety of salads, fresh fruit, hummus, and even organic spicy pumpkin seeds. (Now that’s a cool thing to be munching while you cheer on the Dodgers). Plus, at selected stands on the field level, there’s a tasty new menu item: Sloppy Janes. They’re kind of like Sloppy Joes, except they’re made with tempeh, peppers, onions, molasses, and brown sugar barbecue sauce, all on a vegan wheat bun. And of course there are veggie dogs widely available throughout the stadium. 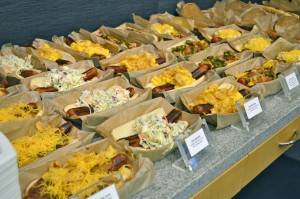 If you’re just looking for some food adventure, you can check out  highlights from this year’s new menu. On the loge level you’ll find what they call “Extreme Loaded Dogs.” These loaded dogs include The Heater (topped with buffalo wing sauce and blue cheese coleslaw) and The Big Kid Dog (topped with mac and cheese and covered in Fritos). There’s also the Frito Pie Dog (topped with chili, cheese, and Fritos), and The Tailgate Dog (topped with baked beans, barbecue sauce, potato salad, and cheese). Note: If you’re going to try one of these, you might want to share with a friend. Note to self: Never attempt to sample all of these in one sitting again.

Feeling hungry yet? If you have a group of anywhere from 25 to 56,000 friends, you can have your event catered at Dodger Stadium through Levy Restaurants, for events on or overlooking the field. 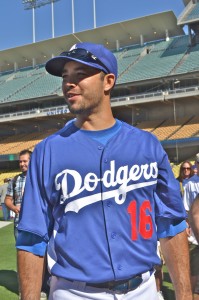 So…what Dodger Stadium treats do baseball players actually eat? We had the chance to meet star right fielder Andre Ethier before the game, and it turns out he has real foodie credentials. He rattled off a list of just about every great restaurant in town that he visits, plus his five-star recommendations when he’s traveling.

We asked Ethier if he had any special food routines for the game, and he says that he tries to eat as healthfully as possible. His post-game snack includes “chicken strips, fruit, and some oatmeal.”

And – whaddya know – after that conversation, he went on to hit a two-run homer.