Annie’s Homegrown and the Growth of Organic

We all want better food for our kids. And, short of producing it in our own backyards and kitchens, we want our food brands to be better too. So what does it take to build – and grow – a responsible food brand?

We recently had a fascinating opportunity to join in a freewheeling conversation with top leaders from Annie’s Homegrown and its parent company, General Mills about the general direction of their food products and the future of organics. And what we learned was that it’s hard to make changes overnight, but the consumers of today are slowly helping to steer major brands toward the better, more wholesome foods that we all want to see. 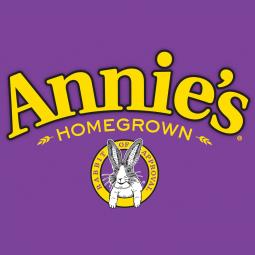 First things first – The elephant in the room: Annie’s Homegrown has, for 25 years, been an independent company producing wholesome, ingredient-driven food with a social conscience. Then last year, food giant General Mills bought Annie’s…infuriating many Annie’s loyalists who feared the company had sold out.

“There probably hasn’t been a truer brand to moms than Annie’s,” Robyn O’Brien, food activist and author, noted at our roundtable discussion. And when the acquisition happened, “I think as moms, we felt like our daughter was marrying this guy who we didn’t even know.”

But Annie’s CEO John Foraker said that Annie’s wouldn’t stop doing things the way it had always done them…and it could possibly lead the way for other “little” companies to grow bigger.”I said, Ken (Powell, General Mills’ CEO), if we join, we aren’t changing,” said Foraker of the move to General Mills.

Given that most organic companies hadn’t really expanded to major large-scale production yet, Foraker added, an expansion would be key to making Annie’s available to more families. “If we can truly scale organic, that’s the biggest win of all. We want to make these products more available to everyone.”

(Note that while not all of Annie’s products are organic, Annie’s has what Foraker calls the “no-no list” for all of its products: no artificial flavors, no synthetic colors, no synthetic preservatives, no GMOs, no growth hormones, and no persistent pesticides.) 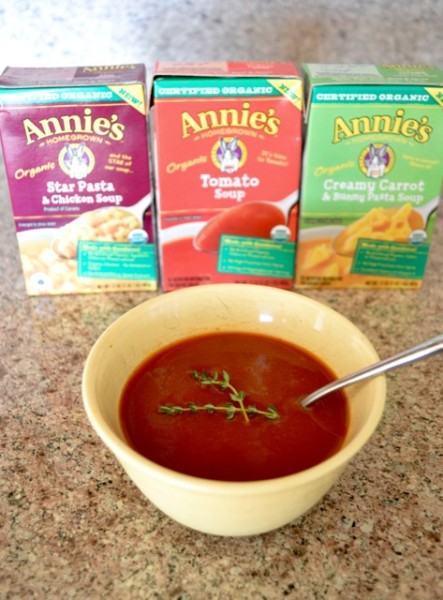 A selection of Annie’s organic soups..

Steve Young, who works at General Mills on Annie’s and overall U.S. business segment strategic initiatives, said he felt that General Mills’ involvement with Annie’s was “an example of how you can take the big to power the small.”

“We’re going to make Annie’s available to so many more people than they would have been able to on their own,” said Young. “This is where the world is going in food. We want to make this the industry’s first billion-dollar brand.”

One factor hampering large-scale expansion of organic foods: the lack of organic farms. Fewer than 1 percent of America’s farmlands are dedicated to organic farming, according to O’Brien.

Another challenge is the price premium currently commanded by organic foods – possibly a cost that would come down if the supply of organic foods could be ramped up. Consumer Reports recently found that organic foods cost, on average, 47 percent more than conventional food (although there was a great deal of variation depending on the product).

Foraker says he envisions a future where 15 to 20 percent of our food supply would be organic – and it would be available to more consumers, at a more accessible price point. Would this represent a massive change in the direction of our system? Perhaps, but that’s what an increasing number of consumers are asking for.

Consider this: Most of the changes in foods in the last decade or so have come from consumer demand – and in some cases even from employees within the company. For example, General Mills originally started developing gluten-free Chex at the request of an employee whose family member had celiac disease.

Another General Mills brand, Yoplait, removed high-fructose corn syrup from its yogurt in 2013 due to overwhelming consumer feedback. Earlier this year, the company took the move a step further by reducing the sugar content of its yogurt by 25 percent.

Recognizing the ongoing demand from parents and families for healthier prepared and packaged foods, executives at both Annie’s and General Mills seem determined to produce more of those foods with high-quality ingredients and get them in front of more people.

According to a joint “vision statement” from Annie’s and General Mills, “Food values in America have changed. Annie’s is going to be at the forefront of that change for General Mills…The change isn’t niche. It’s mainstream. It’s a change that starts now.”

The next big frontier for Annie’s, according to Foraker, will be getting into school lunches as well as kids’ menus at leading restaurants – offering foods with a healthier base of ingredients that adhere to Annie’s list of “no-nos.”

Annie’s recently took a step ahead on this front when it announced that two varieties of its Organic Bunny Grahams, including Honey Bunny Grahams and Friends Bunny Grahams, will be available in K-12 schools nationwide beginning January 2016. Annie’s is one of the first leading natural and organic brands to make its way into cafeterias under the USDA’s new standards to improve the quality of school nutrition.

And it represents just another step forward in what Annie’s and General Mills sees as its mission to “spread goodness.”

“Ultimately, the consumer is going to win here,” said Foraker.

We’re looking forward to see more changes for the good.

Blogger disclosure: We were invited to dinner by members of the Annie’s team. We did not receive compensation for this post. All opinions expressed are our own.