Visit a Historic Castle for the Holidays 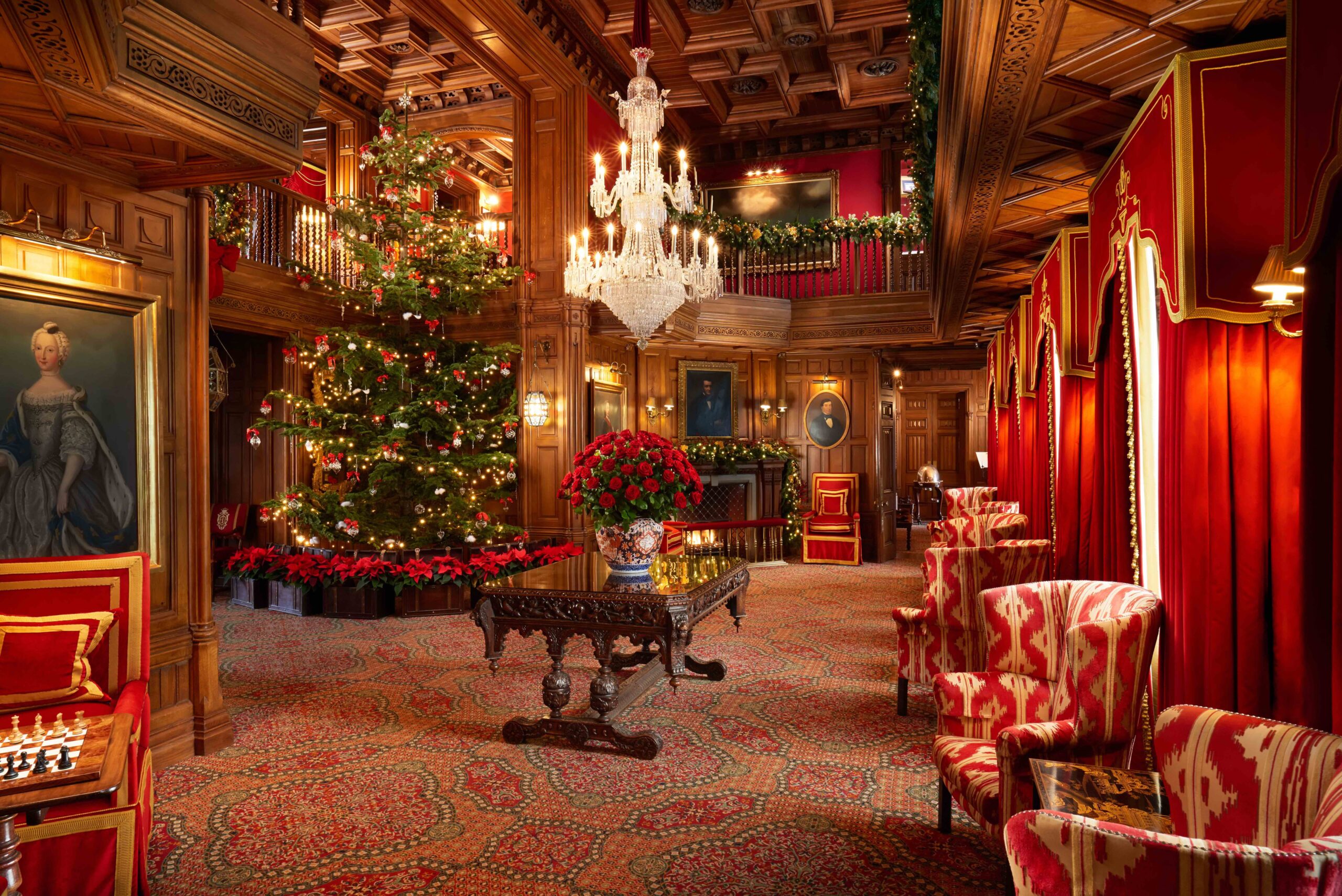 A scene from Ashford Castle in Ireland

The newly formed Storied Collection showcases an array of spectacular properties, all with a distinctive and intriguing history. All told, the collection comprises 39 hotels with a (jaw-dropping) combined age of 14,487 years.

When you visit these hotels, you will have the chance to learn an enormous amount of history. You can take in the breathtaking scenery and architecture, as well as seasonal decorations. And you will even be able to see some quirky features that you won’t find in just any hotel: secret passages, ornate artwork, even a dungeon (yes, a dungeon).

Here are just a few of the historic castles where you can spend your holidays (all photos via the Storied Collection):

The 800-year-old Ashford Castle, located on the west coast of Ireland, sits within 350 acres of immaculate gardens, forests, and verdant woodlands. (And judging from the picture above, who wouldn’t want to spend their holidays here?)

Following a combat victory over the native O’Connors of Connaught in 1228, the Anglo-Norman de Burgo family built Ashford Castle on the perimeter of a monastic site. The area then enjoyed more than three centuries of relative peace. However, then a fierce battle erupted between the de Burgo forces and those of the English official Sir Richard Bingham, Lord President of Connaught. Following the bloody conflict, the parties agreed to a truce. Bingham became Ashford Castle’s new master in 1589. 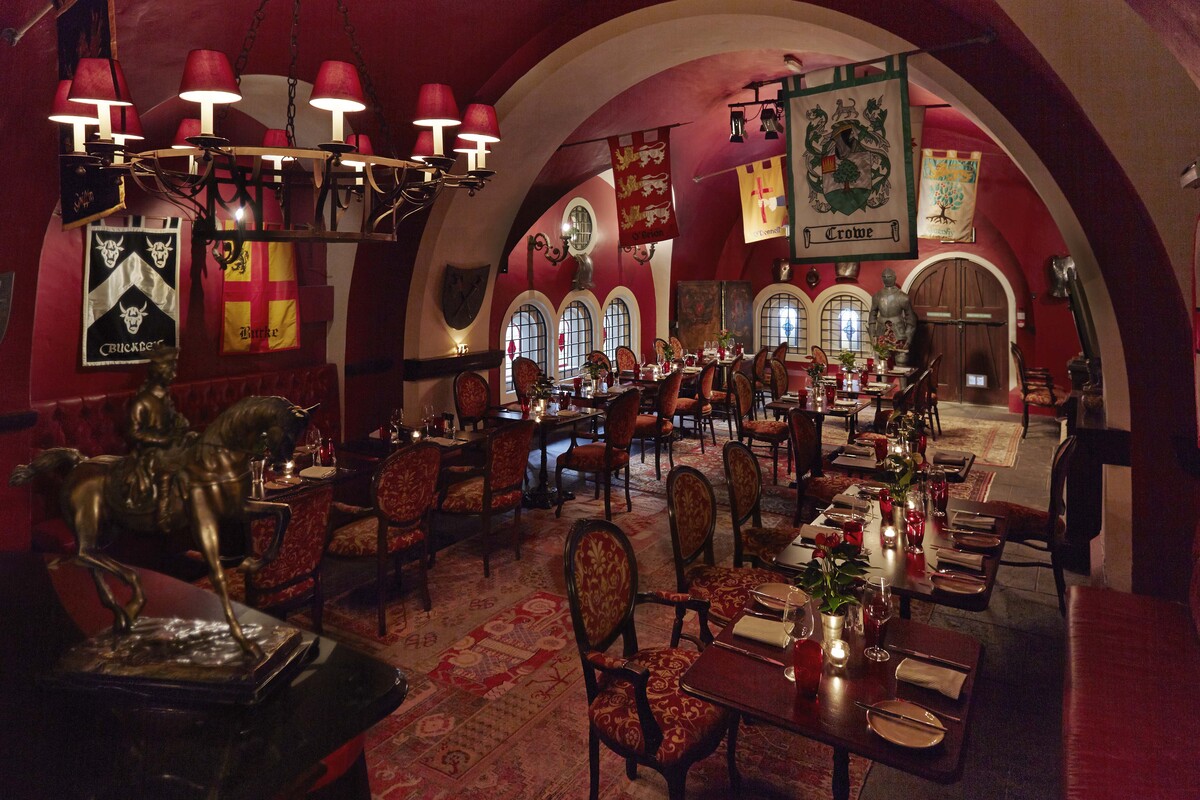 The “Dungeon Bar” at Ashford Castle

Almost another three centuries later, brewer and philanthropist Sir Benjamin Lee Guinness purchased the castle. Having joined his father in the family business while still a teenager, Guinness had eventually taken full ownership of the company. At the time of his purchase, Guiness was the richest man in Ireland.

The castle saw a series of owners and renovations in the ensuing years. It also had its “15 minutes of fame” when  director John Ford chose Ashford as the backdrop for his 1951 movie, The Quiet Man. 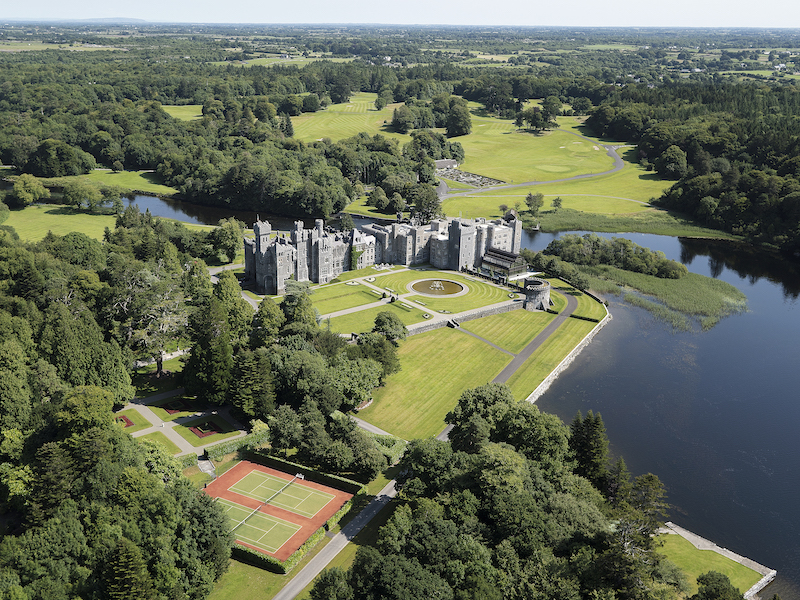 The sprawling restored hotel now offers 83 rooms for holiday stays. Guests can enjoy a strong connection to the land, deep roots in the local community, and an opportunity to experience traditions of local craftspeople and producers.

Holiday rates in available rooms at Ashford Castle begin at £680 per night.

The 19th-century mansion known as Inverlochy Castle lies at the foot of the mountain Ben Nevis in the heart of the Scottish Highlands. The hotel offers majestic views of its own private loch and surrounding glens, which look particularly impressive during the holidays. As you approach the hotel, you will see some of the most spectacular scenery in Scotland, the famous Glencoe and Great Glen. 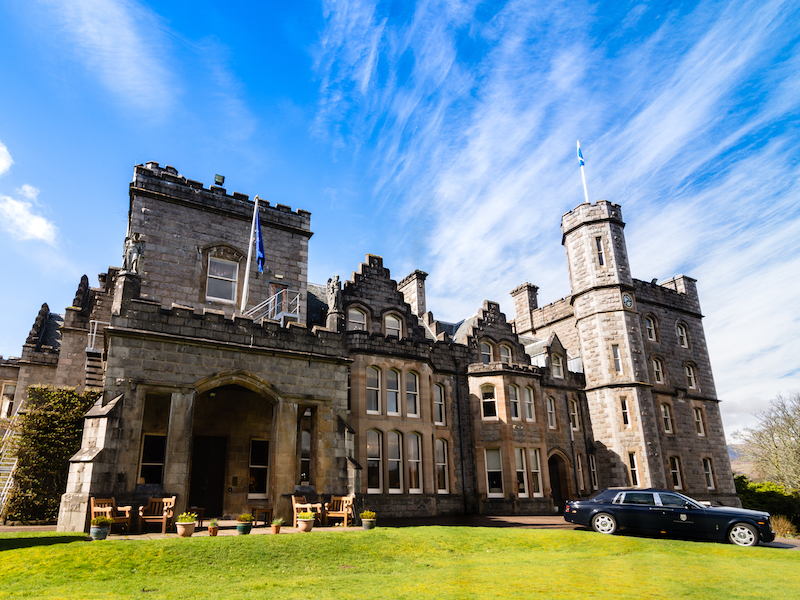 Originally built in 1863, the hotel was owned by William Scarlett, 3rd Baron Abinger. Scarlett was a British peer and soldier who served during the Crimean War and succeeded his father as Baron Abinger in 1861. In fact, you can still see the Scarlett family crest on the spectacular ceiling of the hotel’s Great Hall dining room.

The castle even has royal approval. Queen Victoria once spent a week there sketching and painting the surrounding landscape. When describing Inverlochy in her diary almost 150 years ago, she wrote, “I never saw a lovelier or more romantic spot.” Many guests will agree that that sentiment still holds true today. And what better place to enjoy a historic castle holiday?

Holiday rates in available rooms at Inverlochy Castle begin at £540 per night.

The Castle Hotel at Taunton

The Castle Hotel at Taunton

An iconic Norman fort known as The Castle Hotel at Taunton is one of Britain’s most unique and historic hotels. Nestled in the Somerset countryside, it has a rich history dating back more than 1000 years. Some portions of the original stone structure date back to the 13th century, including its Castle Bow restaurant.

Its origins are not entirely clear, but historians believe the castle began to take shape under Bishop William Giffard (1107-29), while serving as the center of the Norman bishop’s estate.

At some point, the castle became an inn. An ad in a newspaper in 1786 advised “the nobility, gentry, and gentlemen in trade” that the hotel would serve travelers “in the neatest and most comfortable manner for their reception.” 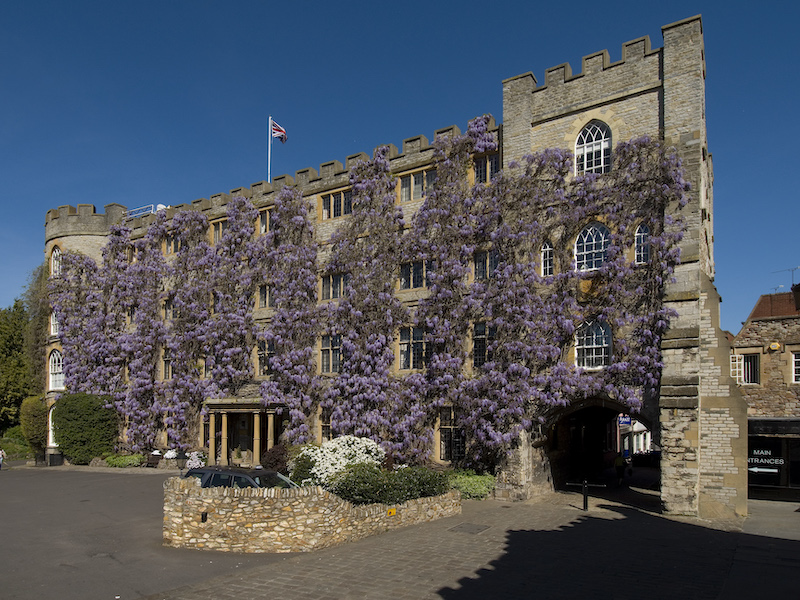 Exterior of the Castle Hotel at Taunton.

The tradition of hospitality continues through three generations of the Chapman family, who have lovingly renovated and maintained the hotel for the last 70 years. The Chapmans have overseen the creation of the award-winning restaurant, Brazz, and the transformation of the iconic Garden & Wisteria Rooms.

Holiday rates in available rooms at the Castle Hotel at Taunton begin at £264 per night. 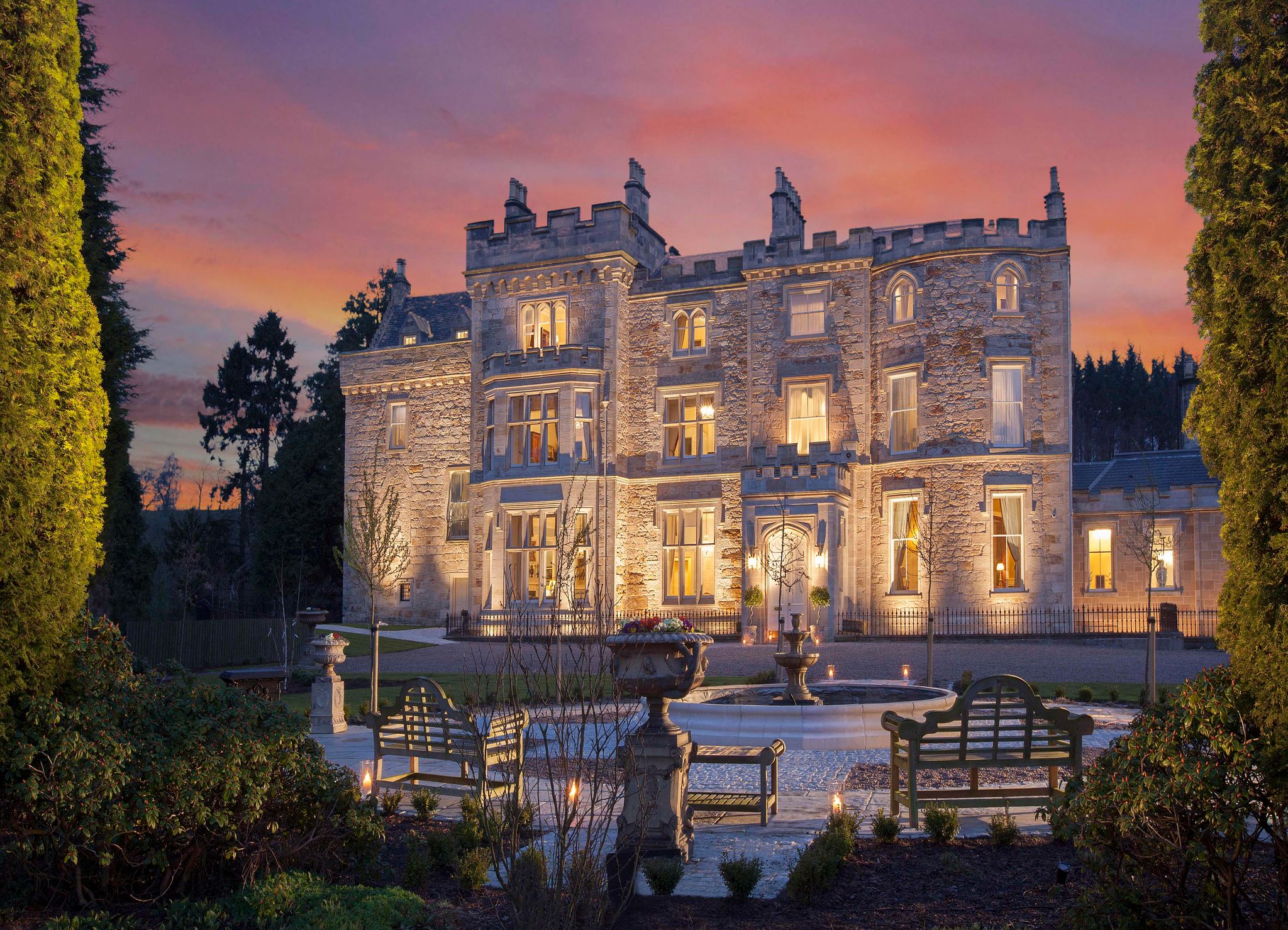 With a rich history spanning seven centuries, Crossbasket Castle in High Blantyre is located amid the rolling landscape of Ayrshire. The land first appears on official records in the 14th century, when it was owned by Scottish nobility, the Hamiltons of Cadzow. (Historians believe that three of the Hamilton brothers were imprisoned in the Tower of London for violating the truce between the kingdoms of England and Scotland.)

Over the following decades, a number of Scottish landowners took ownership of Crossbasket. Two noteworthy owners include the Dean of the Guild of Glasgow, Thomas Peter, in 1709; and Charles Macintosh (the acclaimed inventor of waterproof fabrics) in 1818.

Currently, the castle operates as an intimate hotel with only nine guest bedrooms. Its caretakers have preserved its unique character by restoring many of its original features. In particular, guests will enjoy the lavish gold leaf cornices seen throughout the hotel – the perfect holiday touch.

Holiday rates in available rooms at Crossbasket Castle begin at £225 per night. 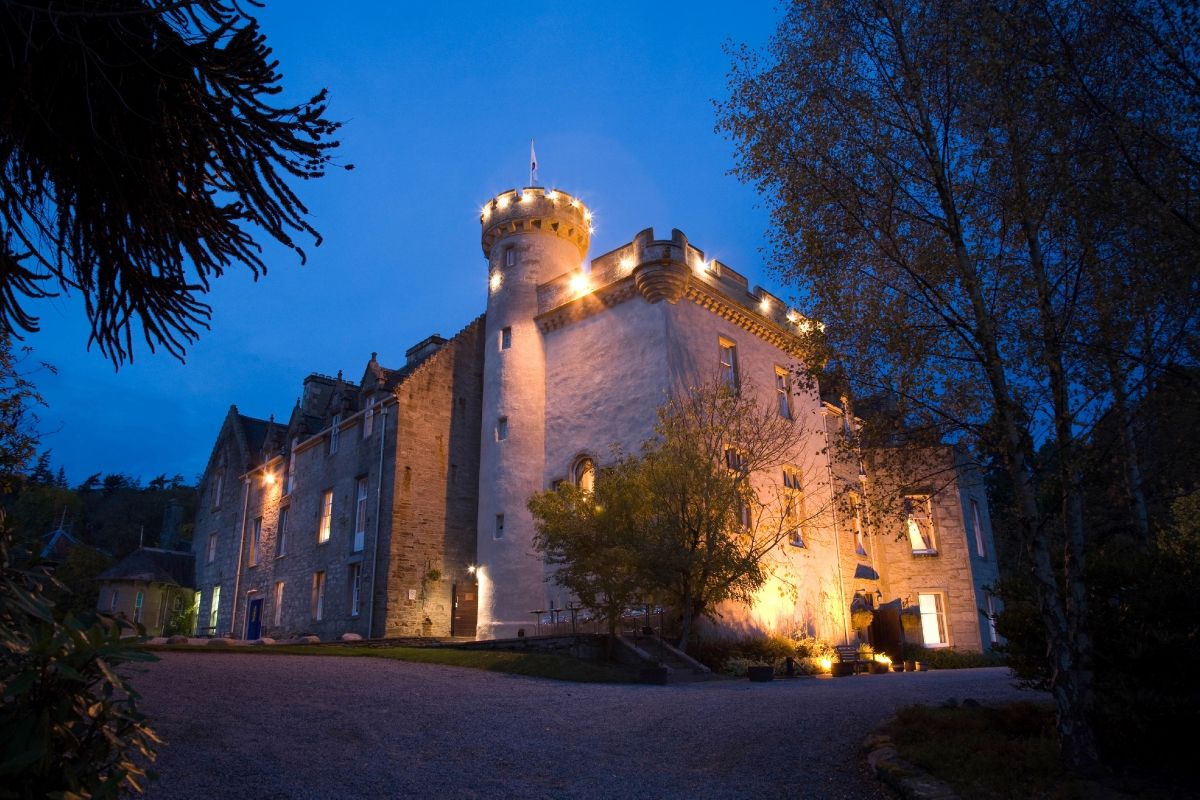 Set in the majestic Scottish Highlands, Tulloch Castle Hotel is a 16th-century former tower house in the town of Dingwall, a royal burgh. Historians believe that Norsemen may have built Tulloch Castle in the 12th century. However, the first recorded owners of the castle are the Bayne family in the 16th century. The Davidson family later inherited the castle. (It is known as the legendary birthplace of Clan Davidson.)

Today, the castle retains many of its original features, including the ancient dungeon, beautiful stained glass windows, an ornate staircase, and the 250-year old panelled Great Hall. Other unique features include a secret tunnel from the basement of the castle across town to the ruined Dingwall Castle.

Visitors can enjoy the local cuisine at Turrets Restaurant, sit back and relax in front of one of the grand log fires, or simply explore the beautiful surroundings.

Holiday rates in available rooms at Tulloch Castle Hotel begin at £500 per night.

More Historic Castles for the Holidays

Curious about how all of these historic castles came together? There’s a… story behind that. Storied Collection COO Michael Goldin and his wife were searching for a castle vacation, but they found historic properties particularly hard to book. After hours of research, Michael finally found the perfect property… a property where his family lineage could actually be traced. That joyful discovery inspired him to help others find delightful historic castles for their own holidays. Along his fellow co-founders, also travel and hospitality veterans, he started the Storied Collection.

If you’re looking for more historic castles to stay in, check out the entire group of castles at Storied Collection.

And if you enjoy learning about historic hotels, don’t miss this story about my favorite historic hotel in Naples (a 16th century monastery carved into the side of a mountain).