What would happen if your local towns went up against each other in a mayors’ cook-off? Would your mayor compete in a cooking contest? What if it meant doing their part to promote healthy, local eating? We had a chance to ask that question recently while serving as a judge of a mayors’ cook-off sponsored by the Blue Zones Project of the Beach Cities.

30 Minutes To Create A Plant-Based Dish

The mayors’ cook-off was part of a larger (friendly) competition that began last fall to see who could get the most residents of their town to take the Blue Zones pledge for healthy living. For the cook-off, each of the mayors from Manhattan Beach, Hermosa Beach, and Redondo Beach worked with a professional chef from a restaurant in that town. Then the mayors went through the rigors of an Iron Chef-type competition. They had 30 minutes to create a delicious, beautiful, raw, vegetable-based dish, using a secret ingredient (green lentils) unveiled right before the timer went off. Keeping up the pressure was the glare of spotlights and cameras; a lively, standing-room-only crowd; and the relentless scrutiny of the judges’ panel. 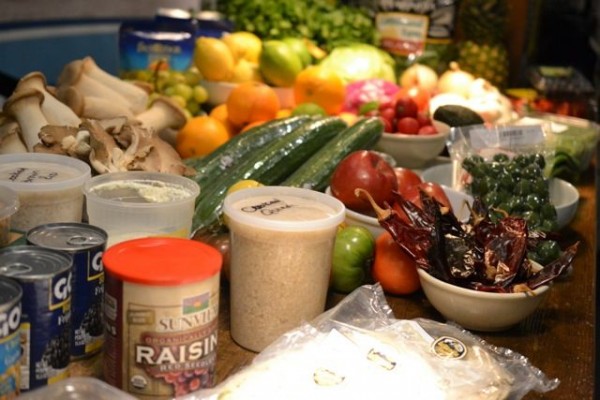 The ingredients presented to the chefs, from Grow – The Produce Store

So – how well do those mayors cook? Let’s put it this way: Hermosa Beach Mayor Jeff Duclos claimed to have a “41 – and -2 record: married for 41 years, only cooked 2 meals.” (His wife was in the audience waiting to taste his creation.) Neither Manhattan Beach Mayor Wayne Powell or Redondo Beach Mayor Mike Gin had much more experience than that. But with professional chefs calling the shots, the mayors went straight to work on grabbing ingredients, prepping, chopping, slicing, and plating. 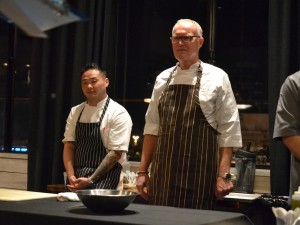 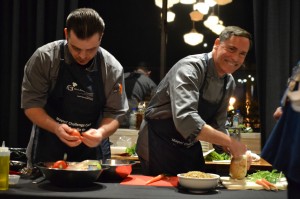 Manhattan Beach Mayor Powell (right) is having a great time (but watch those fingers!) 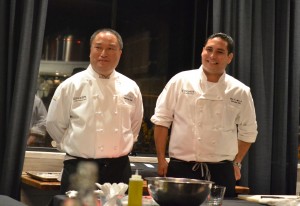 And in the end, the food was…incredible. The Manhattan Beach team of Mayor Powell and  Chef Chris Garasic of Zinc at Shade Hotel designed a vegan “cannoli.” They took thinly sliced jicama, filled it with coconut and raw almond cheese, dressed it with a lentil puree and cilantro pesto, and topped it with shredded cabbage. 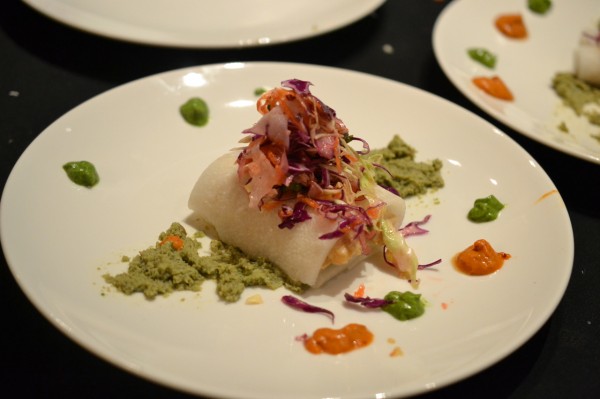 Hermosa Beach Mayor Duclos and Chef Tin Vuong of Abigaile Restaurant created a raw jicama ravioli. The ravioli, with a lentil filling, rested on a bed of thinly sliced marinated mushrooms and radishes. 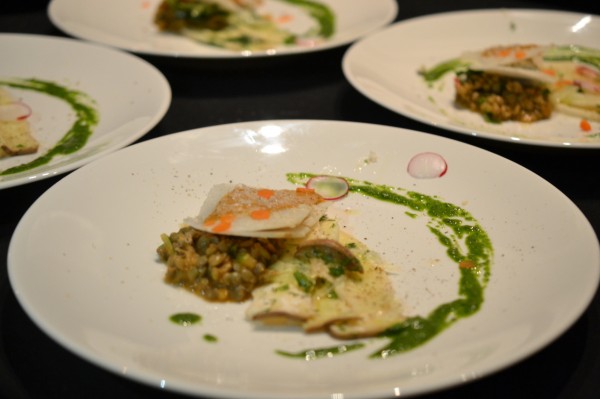 And the Redondo Beach team of Mayor Gin and Chef Bert Agor of Kincaid’s came up with king oyster mushrooms, cut to resemble scallops (“forest scallops”). They presented the scallops along with lentil tabouli and avocado-chocolate mousse. 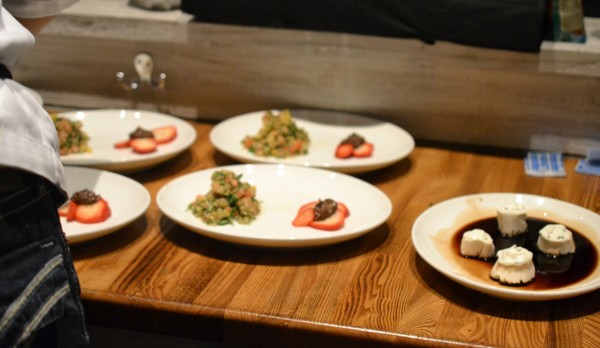 We Have A Winner

The winner? The judges’ panel gave the nod to the Manhattan Beach team’s incredibly delicious jicama cannolis. But, truly, all three of these dishes were winners. They also gave inspiration to a crowd of community members that it’s possible to cook something healthful and delicious in under 30 minutes.

Kudos to the mayors and chefs for putting themselves out there in a public forum. And big thanks to all of them for doing their part to promote healthy eating in our communities.