The amazing, all-American cranberry is bursting with both nutrition and flavor. It’s also a favorite component of many fall dishes. And if you’ve ever seen a cranberry harvest, you know that there are few fruits that put on such a spectacular and colorful show while being picked. 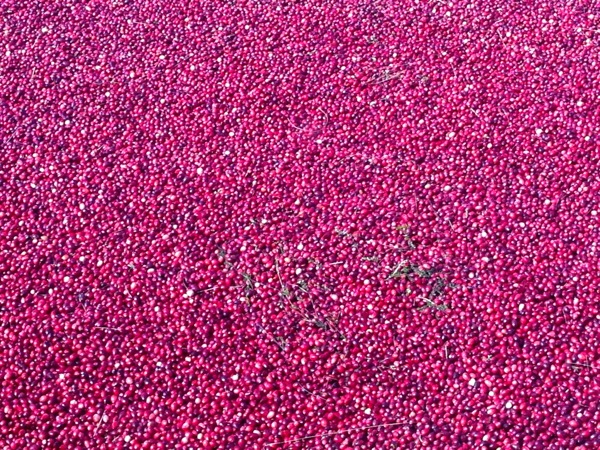 A sea of cranberries at the cranberry harvest

The cranberry harvest generally takes place in September and October. In New Jersey, where my mom and dad live, cranberry crops have a long and distinguished history. (New Jersey is the country’s third-largest producer of cranberries, after Massachusetts and Wisconsin.)

For starters, only three fruits can trace their original roots to North America – the cranberry, the blueberry, and the Concord grape. Native people used cranberries for both food and medicine. And formal cranberry cultivation in New Jersey dates back as far as 1840. Once those early cranberry growers established their crops, they found a major market for their product among the seafaring crowd. Sailors bought cranberries to keep in barrels of water on ship as a snack to ward off scurvy.

On a modern-day cranberry farm, there are two ways to harvest cranberries. A “dry” harvest is when a machine carefully combs the berries off the vine, and the farm sells the berries as fresh fruit. A “wet” or water harvest – the much more common approach, and the most spectacular to view – is when the farmers flood the bog with water and a machine pushes the fruit off the vines and corrals the berries onto waiting trucks. (Very convenient that fresh cranberries float!) 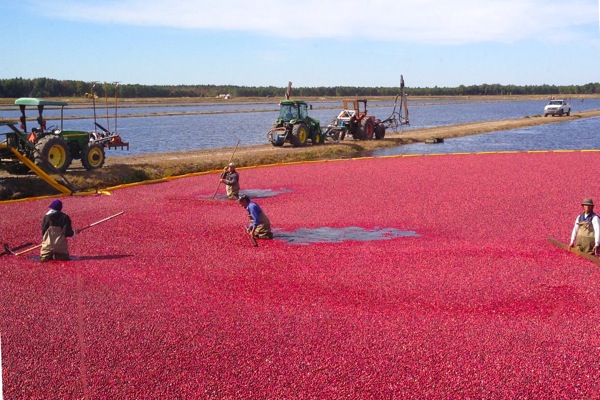 Recently my dad, Joe Ponessa, took a cranberry harvest tour of J.J. White Farm, in New Jersey’s Pine Barrens region. In honor of the mighty cranberry, and dear old dad, here’s his account of the harvest:

Joe Darlington and Brenda Connor are both 5th generation cranberry farmers working on a farm originally founded by Joe’s great-great grandfather. Each generation has introduced major technical or cultural innovations to cranberry/ blueberry cultivation or production. A farmer of a few decades ago would barely recognize today’s cranberry operation.

Joe is a biomedical engineer who has turned his talents to the design and fabrication of devices to make the farm more efficient. His wife Brenda is a leading expert in cranberry cultivation practices and also an innovator. She says: “In farming, if you can’t improve yields each year, if you stay static, the industry will leave you behind and you will fail.”

New cranberry vines undergo DNA analysis to determine those that excel in vine growth, and those that produce abundant fruit. During the growing season, Brenda travels into the bogs (flooded only at harvest time) to survey insect populations. She surveys both daytime and night species (when she ventures out at 2:00 AM) and carefully monitors bees’ activity in the bogs.

The operation combines detailed geographic information on plant health throughout the bogs (350 acres of cranberries). The farmers collect information through GPS positioning, and also by monitoring soil moisture and temperatures throughout the bogs. This allows spot application of fertilizer via a specially designed spray rig. During cooler weather, prior to harvest, farmers monitor bog temperatures 24/7. (That’s why they keep computer monitors even in the bedroom.) When temperatures approach freezing, an alarm sounds and sprinklers turn on in the indicated plots.

There is a strong emphasis on sanitation and food safety. Each worker has his/her own pair of boots. They log them out and in for each use. Pets are banned from the premises; so are peanuts and tobacco. More than 60 data logs support and track the various protocols in the operation. All hydraulic equipment uses food grade hydraulic oils. 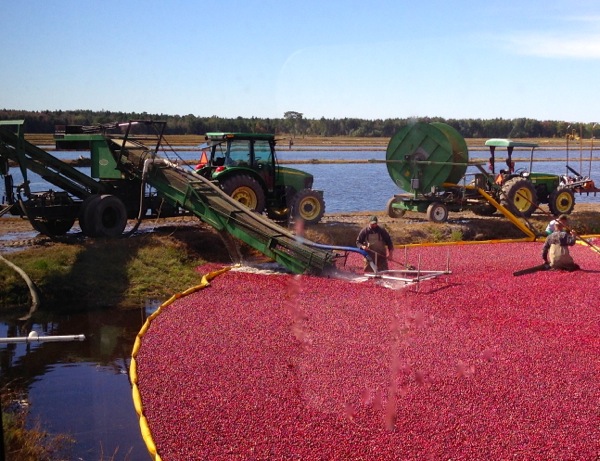 At harvest time, the farmers flood the bogs. On many farms a specialized vehicle drives between the rows to dislodge the berries, but this compresses the soil, potentially harming the plants. Joe designed a machine that does a better job. It consists of a small barge, equipped with a device to shake the berries loose, as the barge goes back and forth along the rows of vines. The ripe berries float to the surface, yielding the ‘picture postcard’ sea of red berries floating on the surface. Workers with waders then herd the floating berries towards a corner of the bog, where a conveyor loads them into a dump truck. We watched the truck fill up in about five minutes.

The conveyor has a series of paddles that carry the berries up to the truck, a potential hazard for workers. Joe has devised a spacer system at the end of the conveyor, creating a safe zone for workers. Water jets attached to the spacer give the berries a final push on to the conveyor, a job that previously had been done by a worker.

The last stop on the tour was the packing house, where we saw the trucks unloading into a water bath adjacent to the building. Most of the product goes to Ocean Spray, a growers’ cooperative that has done much to support growers, both large and small. 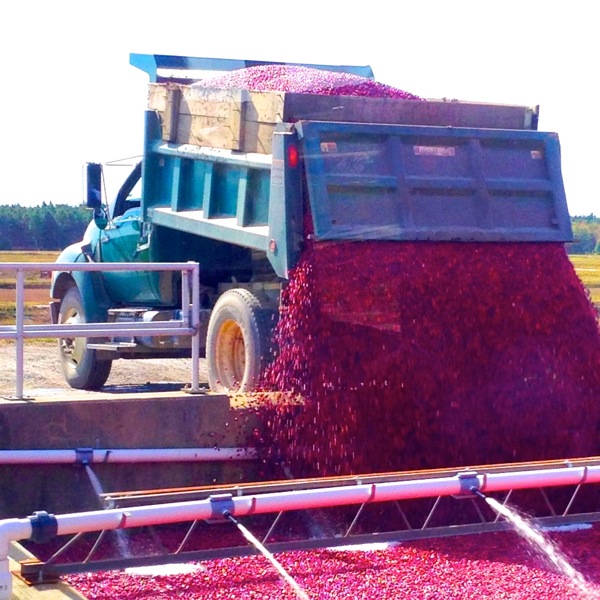 Dump! The colorful crop gets dumped into a water bath

It is a long and amazing journey from bog to juice, sauce and many other fine cranberry products.

What to Do with Cranberries?

What do they do with all of those cranberries? Here’s a fun cranberry fact: It takes 4,500 cranberries to make one gallon of cranberry juice.

Hungry for cranberries? Check out one of my favorite holiday cranberry recipes – requiring no cooking, and easy for the kids to make – Cranberry-Jicama Star Appetizers.

Thanks to Dad for the account and the pictures, and to J.J. White Farm for opening their farm to visitors.

4 Responses to The Cranberry Harvest