After a trip to Idaho to witness the Idaho Potato harvest, we have potatoes on our mind.

We spent four fascinating days with the Idaho Potato Commission learning more about the annual potato harvest, watching potato processing in action, and sampling delicious potato recipes. We will never look at a potato the same way again.

Blogger disclosure: The Idaho Potato Commission paid for my trip to Idaho, however we did not receive compensation for this post. All opinions expressed are our own. 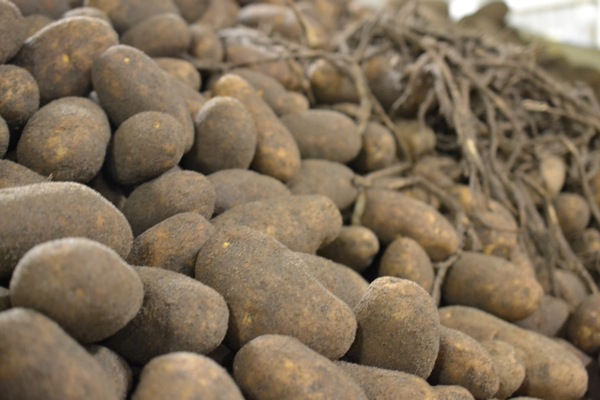 At the very least, we want to say this: Don’t let the humble exterior of the potato fool you. They are nutritional powerhouses. They appeal to a wide range of diets and palates. Plus, they are extremely versatile in just about every dish from appetizer to dessert. 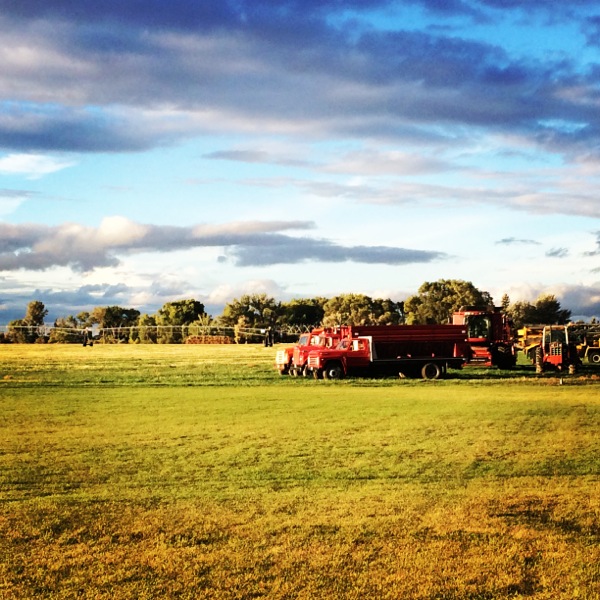 For starters, the Idaho countryside is stunning. Fluffy clouds frame wide-open fields, and, as you head further East, the majestic Teton mountain range. Idaho’s climate and topography is uniquely suited to growing potatoes – warm days, cool nights, and rich volcanic soil. Idaho harvests 300,000 acres of potatoes each year, amounting to some 13 billion pounds of potatoes. (That sounds like a lot. But consider that the potato is America’s favorite vegetable, and that the average American eats 110 pounds of potatoes each year.) Idaho produces nearly one-third of the country’s potatoes.

Farmers plant potatoes in the spring, usually April. The Idaho potato harvest happens in October, which means that we arrived just in time to see a flurry of potato-related activity. “The ‘magic’ date is October 15,” says Don Odiorne, the vice president of food service for the Idaho Potato Commission. “There are still schools around here that let kids out for the potato harvest.”

Our first stop was at Hoff Farm, run by James Hoff, a fourth-generation potato grower. Hoff’s 2,000-acre farm grows 250 acres of potatoes. With potato harvesters that dig four rows at at time, Hoff says, working 12 rows at a time can yield 30,000 pounds of potatoes in four minutes. Once harvested, he stores the potatoes in one of two large sheds. The potatoes pile up as high as 18 feet but they get a continuous supply of air and humidity to preserve their freshness. Combined, the two sheds can store an astonishing 7.5 million pounds of potatoes until it’s time to move to their next destination. 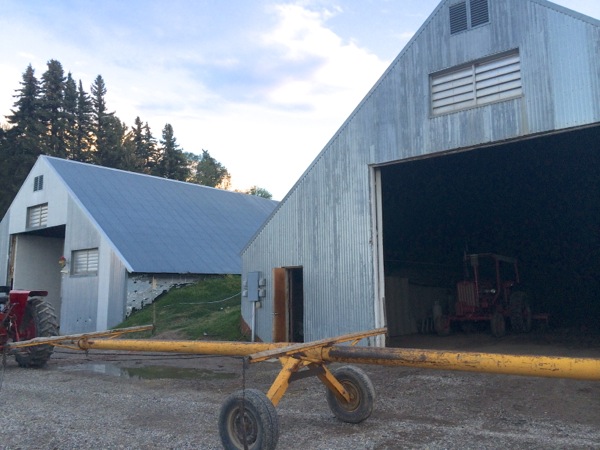 The following day we got a chance to see the next step, potato processing and sorting at Wada Farms. Wada Farms, a family-owned business, started out in 1943 with 160 rented acres and now farms on more than 30,000 acres. We toured its 140,000 square-foot fresh potato packing warehouse, located in Pingree, ID. 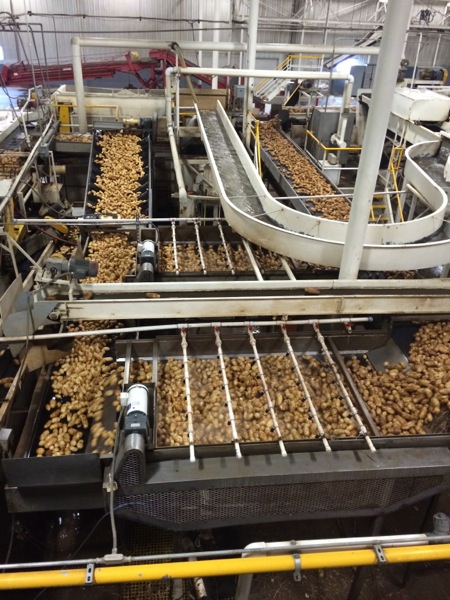 The potatoes undergo an amazing journey at the warehouse. Special machines clean, brush, sort, size, and then send them off in various directions based on size and shape. While some potatoes get bagged up to be sold in large quantities, others get a special plastic wrap to be sold individually as baking potatoes. 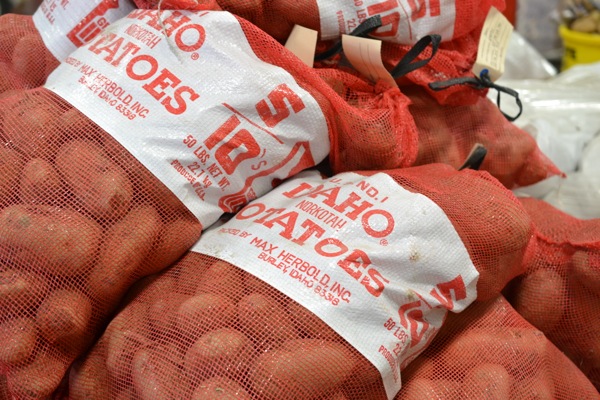 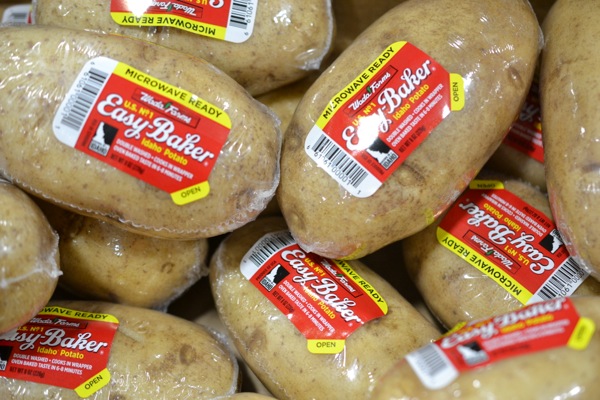 What else happens to potatoes? We toured the Lamb Weston fry plant, where we watched the making of French fries, tater tots, and hash browns. We also toured the Idahoan, a dehydration plant, which dries potatoes into slices and flakes for instant scalloped or mashed potatoes, packaged potato products, and mores. Since both plants use proprietary equipment and processes, we were not allowed to take photographs there. Suffice to say, however, that the possible uses for potatoes are seemingly endless.

Coming up in our next blog post: all about eating potatoes, from nutrition to a recipe for Sweet Potato Tart. Many thanks to the Idaho Potato Commission, and to our new friends at all of the farms and plants we visited. Here we all are in – where else? – a potato field, where we had a chance to dig our own potatoes at Brett Jensen Farms: 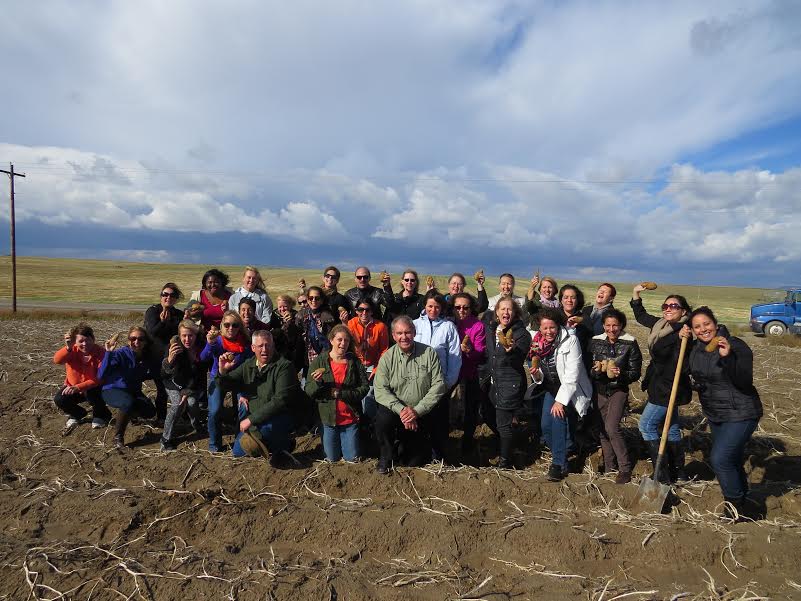