Sumo citrus fans have some good news this year. There will be more Sumos this season, and they will arrive in stores nearly three weeks early this year.

Sumo citrus is that addictively sweet jumbo-sized mandarin orange with the distinctive “top knot. It’s on track to launch its season in late January, according to Seth Wollenman, sales/brand manager for Suntreat Packing and Shipping Company. (This news generated whoops of joy in the Jolly Tomato household, where the kids haven’t stopped asking for them since last year’s season ended.) 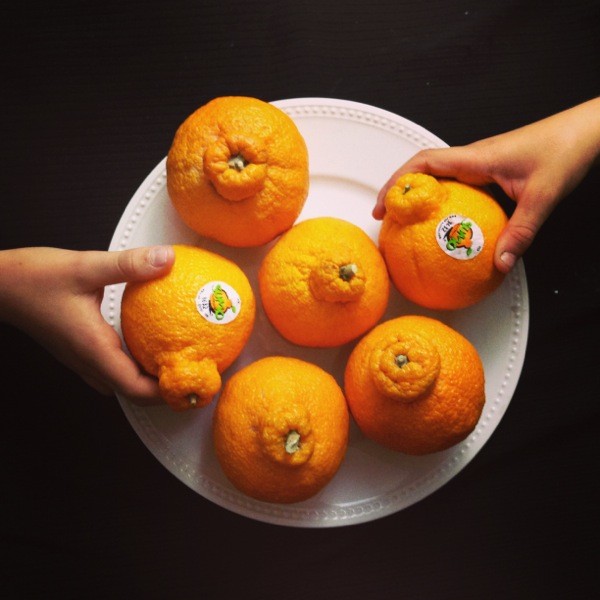 “Thanks to a warmer than normal growing season, most all citrus varieties have matured earlier with sugar/acid levels at optimum flavor.  Our Sumo citrus is at least 3 weeks earlier this season. We will have excellent flavor for this early season start,” says Wollenman, who is himself a Sumo grower.

Wollenman adds that there is a larger crop of Sumos this year as well: “As our trees continue to grow, they yield larger crops every year.  Last year’s crop was less than projected because of the devastating loss from the citrus freeze.  But this year we’re on track for shipping as much as double the volume.”

Developers in Japan created the Sumo with features of the easy-to-peel Japanese satsuma and the big, sweet oranges of California. Known as the Dekopon in Japan and Hallabong in Korea, it is grown by family farms in California’s Central Valley. Since its introduction in the U.S., the Sumo season has traditionally run from February through May, or until supplies run out.

The peel of the Sumo is bright orange, bumpy and loose so it peels effortlessly. Sumos have very little abedo or rag (the white part of the citrus). This allows the fruit to section easily with less of the white “netting” sticking to the fruit. Sumos also claim to pass the “Eat in the Car Test” – the fruit is less sticky, and hands stay dry.

Southern California Sumo fans know where to look for Sumo citrus. GROW – The Produce Shop of Manhattan Beach will once again be the first store in the country to carry Sumos. They may arrive as soon as January 10.