If you haven’t sunk your teeth into Santa Clarita Diet on Netflix yet, you’re in for something delicious. It’s a delightfully gross comedy that sets grisly zombie antics against the perfect suburban backdrop. In the show, Drew Barrymore plays a Santa Clarita realtor who wakes up one morning to find herself… dead… but otherwise perfectly cheerful and ready to take on the world. She and her husband are forced to keep up appearances while she pursues her insatiable hunger for human flesh.

We won’t spoil any more for you, but it’s safe to say that if you’re going to eat something while you watch this show, you’re going to want something bloody, or at least something that looks bloody. That’s why we’ve got this perfect “ground beef” – actually beet hummus – to satisfy your hunger while you binge-watch the first 10 episodes. (Er… not that we know anyone who would do that. Ahem.) 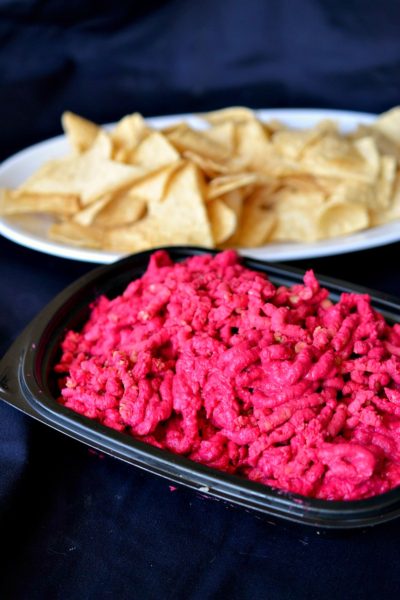 This hummus is basically your regular hummus with beets added in for color. But – to get that “ground beef” look we added extra garbanzo beans to make it a little firmer and give it a few spots of white, and then we pushed the whole mixture through a meat grinder to get that fresh-ground look. 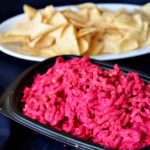 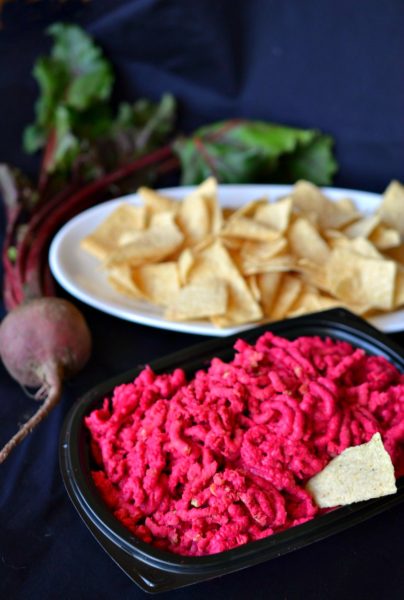 For the meat grinder, we used our KitchenAid meat grinder attachment, but you could also use an old-fashioned hand-cranked grinder. If the hummus comes through a little too liquid-y, add more garbanzo beans to firm it up so it holds the ground beef shape.

Then go ahead and serve it in some sort of tray that looks like you would find ground beef in (we don’t recommend using an actual tray where ground beef has been; we just washed and reused this takeout food tray), and enjoy it with veggies, chips, or pita bread. Key question: Will you tell your friends what it is when you serve it?

Blogger disclosure: I am part of the Netflix Stream Team, through which I get a subscription to Netflix and other screening benefits in exchange for monthly blog posts. All opinions expressed are my own.

One Response to Ground ‘Beef’ for the Santa Clarita Diet